The Executive and members of Ika Professional Printers Association on Saturday December 8, 2018, held an end of year party, to appreciate themselves and thank God for His mercies and benevolence upon them.

The event which was the maiden edition of the coming together of members of the association was held at Ezinne Hotels and Garden, located along the Old Lagos/Asaba road, Boji-Boji Owa, in Ika North East Local Government Area of Delta State. 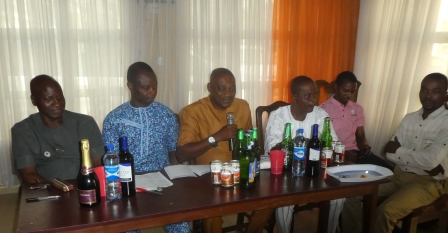 In a brief remark, the chairman of the association, Sir Rot. Andy Mordi, while welcoming members and invited guests to the ceremony, commended the organizers of the event for putting  so many good things in place that will make the party memorable, he noted that the printing profession is very lucrative but it is also time consuming, hence for one to be successful in the business, he or she must be fully committed with his time and energy.

Continuing, he stated that the day was supposed to be the formal inauguration of the association, from Ika Professional Printers Association to Association of Professional Printers of Nigeria (ASPPON) by the Delta State chairman of the union; saying that it is unfortunate that the state Chairman said he thought that the scheduled date for the event was on Saturday December 15, 2018. Speaking further, Sir Mordi, informed the house that His Excellency and other political big wigs who were invited for the event could not attend because of the Mega rally taking place within the metropolis that same day to signal the flag off ceremony of the electioneering campaign of the State Governor and other Peoples Democratic Party (PDP) candidates vying for the 2019 general election.

In a brief speech, the Publisher of Ika Weekly Newspaper, Mr. Steve Ekiri Mekiriuwa Ashien, while appreciating members of the association for putting up such event, said that it is nice to see all of them coming together as one, disclosing that, that was what has been lacking among them for long. Continuing, he thanked each and every one of them, particularly those that have been able to organize the association to the present level. While urging them to keep it up, he noted that Printing, Publishing, writing and reading is one of the most interesting things that a person can think about. He stated that for an individual to develop his or her mind, there are two important things the person should do. First the person should embark on a lot of travels which will enable the person to meet with people; while the second is for the person to read books, in his words “please don’t stop reading books because it is very important, because when you read books you become well developed.”

Elder Enagbale, who said that he was the first General Secretary of the association, for twelve years, thanked God for the oneness exhibited by members of the group and the great achievements which they have recorded over the years as an association. He urged members to remain focused and united in order to attain greater heights in their cherished profession.

Guests at the colourful event were treated to a lavish entertainment of sumptuous meal and choice drinks.

Some members of the executive of the association are Sir and Rotarian Andy Mordi (Chairman), Mr. Jatto Jonathan (Secretary) and Mr. Simon Arumuka (Vice