The remains of late Ikenna Uwagwu popularly known as Clear-Road were on Saturday, September 1, 2018 laid to rest at his hometown, Ute-Okpu in Ika North East Local Government Area amidst tears.

The 33 years old man was sent to early grave by one Kido Nwachokor who stabbed him to death on the evening of Friday, August 17, 2018 at Basi Olamide’s beer parlor in Ute-Okpu.

Many that attended the burial ceremony condemned in strong terms Nwachokor’s wicked act, saying that no matter what the issue was, he went too far killing Uwagwu, his friend. 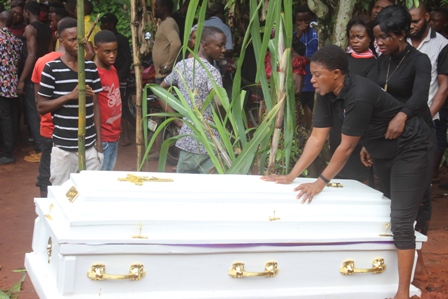 Lamenting over her late younger brother’s death, Franca Uwagwu said she wondered if the pains Nwachokor has caused them would ever go off their hearts. He prayed God to have mercy on the soul of her late brother and grant him a peaceful rest. She appealed to Delta State Police Command Asaba that justice for to take its course.

Kido Nwachokor who sniffed life out of Ikenna had since handed himself over to the police in Owa-Oyibu Police Division and was later transferred to the Delta State Police Command, Asaba.

OUR SON’S DEATH HAS NOTHING TO DO WITH MONEY CONFLICT-Uwagwu Family
The Uwagwu family of Ibiegwa quarters in Ute-Okpu, Ika North East Local Government Area has debunked the statement that their son, Ikenna Uwagwu, also known as Clear-Road was killed following a disagreement over how to share money said to be given to him by a politician.

The elder sister of the deceased, Franca Uwagwu reiterated that his killing was a set up. According to her, “I will say it over and over again that the killing of Ikenna was a set up. Kido Nwachokor who stabbed my brother to death should be made to confess those that sent him to carry out such wicked act. Ikenna and Kido were friends and had no quarrel before the day of his death. Those who were at Basi Olamidel’s bar in Ute-Okpu where my brother was murdered said Kido before carrying out his plan told Ikenna that he was going to kill him and that Ikenna laughed over it thinking that it was a joke. Kido went ahead to kill him just as he threatened.

I am of the opinion that all those that went to Delta State Police Command, Asaba where Kido is cooling off to speak evil of my late brother should also be held responsible as they may be among those that planned Ikenna’s death”.

She prayed God to expose all those that have hands in his late brother’s death.
Ikenna was stabbed to death on the evening of Friday, August 17, 2018.

One of the most exciting teachings  received on Wednesday 23rd November, 2016, during an inaugural …