An indigene of Ohumere Community, president of Delta Cooperative Federation Delta State who also has been on acting capacity of President General of Agbor Community Union since the resignation of Mr. Lucky Ngbeken, has formally been confirmed the new President General of the union which is a socio cultural group of Agbor Kingdom. 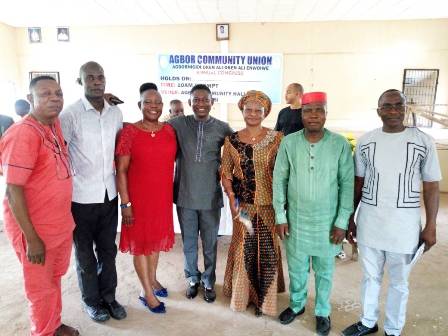 His confirmation was made during the  2018 annual Conference held recently at Agbor Community Hall to discuss issues concerning the growth and development of Agbor Kingdom.

The conference which was well attended by sons and daughters of Agbor Kingdom including the Board of Trustee among other groups had Mr. Onyeche commended for demonstrating competence in his leadership thus far as Ag. President.

Mr. Larry Onyeche who with all sense of humility and gratitude to God welcomed all the participants to the conference as the day seemed to be the first time of his seeing some of the illustrious sons and daughters of the kingdom. He thanked them for honouring him as well as travelling far and near to attend the conference.

He appreciated them for the cooperation his administration has enjoyed particularly the hospitality shown to his executive during their tour of communities and urged them to keep the flag flying.

Speaking further in his address, the President General explained that his tenure while in acting capacity, through the effort of the good people of Agbor made lots of achievements which were listed for discussions. Among the achievements as listed include the familiarization visits to villages/towns, registration of the Union with the CAC, Constitution and the Board of Trustees, building/furnishing of the Agbor Area Command, approval of military base, WhatsApp forum, voters registration and skill acquisition. Others include the building of a new palace, constitution of the youth body of the union, shopping mall, palace assistant fund, buying of Agbor Community union vehicle which according to him are all in the pipeline.

He further stressed on issues bedeviling the establishment of a rest park at Emuhu community by the state government, equipping the community union hall to make it fully functional and at the end suggested the minimum amount of #12,000 to be contributed by all working Agbor indigenes for the overhead cost of the palace fund proposal which was unanimously supported.

Arising from the achievements listed, those who spoke separately, Mr. Peter Egwu, Mr. Fidelis Nmoye, Bishop Elvis Eluroh among others commended Mr. Onyeche and his executive for the good job which according to them are obvious, adding that they are now much more convinced to cheerfully donate financially to the union.

Meanwhile, Sir Tony Obuh having commended the executive of the ACU, Agbor Community Union enjoined them to look out for other means of rendering assistance to the palace with their limited resources.

On her part, the Assistant Commissioner of Police, Mrs. Chinye  Ikejiani, in charge of Agbor Area Command ably represented at the conference by SUPO Christian Ekpolughe, on behalf of the Inspector General of Police, the Delta State Commissioner of Police, thanked the ACU and Jim Ovia for their efforts which precipitated the smooth take off of the Agbor Area Command. She promised to practice effective community policing and assured that they would always be on ground to respond to every security call.

The conference climaxed with the confirmation of Mr. Larry Onyeche as the new President General of Agbor Community, while Mr. Charles Epkenisi was also confirmed as the first Vice President. Others elected into the union executive include, Dr. Mrs. A. O. Okobia as Treasurer and Mr. Ode Nmakama as Provost.