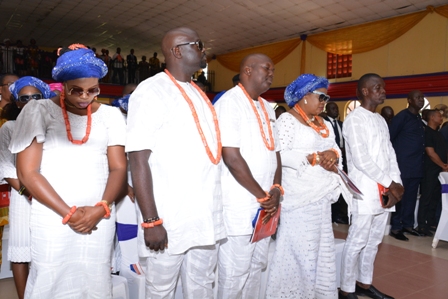 The burial rites began with a service of song at the palace of the Obi of Owa, on Friday 27th April, 2018 followed by funeral at the same venue, and ultimately interment of her remains at the palace in Owa-Oyibu, headquarters of Ika North East Local Government.

Giving his sermon, Ven. Dr. Jonathan Adudu said God’s decision is final, so it’s our duty to submit to his will.  He described the late Queen Victoria Ejime Efeizomor as an epitome of selflessness, humility, and simplicity,  who lived a life of submissiveness, saying that her life of service to humanity is worthy of emulation. 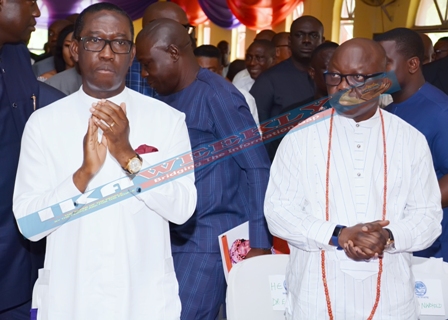 In his tribute, Dr. Emmanuel Efeizomor, 11(JP), the Obi of Owa and Chairman, Traditional Rulers Council Delta State, said the 13th day of April 2018 will remain one of the darkest days in the history of Owa Royal palace.

He said he is shocked beyond human resistance at the passing away of the Alasi, who began her walk at the Royal palace at the age of 6 and concluded it at the age of 68.  He said she was a queen who was distressed when Owa women were distressed, or children facing hardship.

On his part, Governor Ifeanyi Okowa in his tribute said Delta State has lost a rare gem, not just Owa Kingdom.  According to him, “Queen Victoria was a woman of selflessness and womanhood. She was a great pillar of support to Obi Efeizomor 11 and her ubiquitous influence in and outside of the Palace in no small measure helped the kingdom to run seamlessly.

Queen Victoria was very large hearted; her compassionate and accommodating nature was a unifying factor for all the Princes and Princesses of Owa kingdom.

Governor Okowa noted that she will surely be missed by all, including himself, alluding that her personality always left an impression on everyone she came across during her lifetime.

Princess Helen Efeizomor, the only daughter of the Alasi, said the news of her passing away, “hit me her thunder bolt having spoken to her merely hours before her death”. She however said that the Alasi will continually live in her heath till they meet to part no more.

Others, who spoke in their separate remarks and their tributes in the memory of the late Alasi, said they wouldn’t question God, irrespective of how painful it might be. They said they took solace in the fact that she is resting in the bosom of God, especially as she was God fearing and after the things of God before her demise.