It is totally disheartening, the story  of  the two sons of Pastor Okwuokenye whose lives were plunged into a gully of death by flood caused by a heavy downpour of Thursday 22nd of June 2019 at about 3pm which lasted for only about two hours. 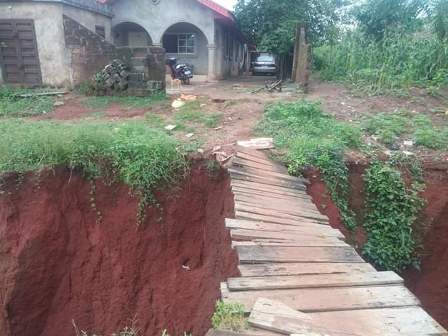 The late sons, Testimony and Godwin Okwuokenye aged 15 and 12years respectively, dragged away by the flood into the gully right behind Agbor Technical College, were sons of Revd. Goddey Okwuoenye, Senior Pastor, Church Of God Mission, Success Centre, Obi Ikenchukwu Road, off Uromi Road, Agbor. It was gathered that after a frantic search for the boys on that Thursday, only one of the bodies were found lying dead in the gully until the next day when the body of the other boy was found; also already dead. Both siblings have since been buried.

Ika Weekly reporter who visited the house and the church of the bereaved, Revd Okwuokenye, met the members of the church in a reflective mood. They and their pastor, though challenged to have lost two loved ones in one day, seemed not to be deterred by their bereavement as they praised and worshiped God even in sobriety, singing and dancing in tears believing that the boys are with the Lord.

During his message tilted “It Is Well With My Soul” the visiting Pastor, Senior Pastor, Church of God Mission, Prosperity Centre, Revd Samuel Ibude likened Okwuokenye’s situation and predicament to that of Job in the bible. He admonished the church to see it as a trial of faith and support their pastor in prayers. In a bid to encourage the bereaved pastor, Revd.  Ibude read from different verses of the bible reminding him that in Job, 14:1 every man born of a woman is full of troubles. He emphasized that Job was described “as a perfect man that feareth God and escheweth evil yet was befallen with even worse situation” and that righteous people pass through hard times that contests the strength of their faith.

He further encouraged Okwuokenye to strengthen himself in God after describing David’s predicament in I Sam 30:6, reading from II Cor. 4:8, he quoted Apostle Paul, saying, “We are afflicted in every way but not crushed, perplexed but not driven to despair” advising him not to lose faith in himself, in God and in the ministry.

In his words, Revd Ibude said “what is life? it is like a vapor that vanishes away, it has never been fair to anybody, it is full of pains and problems, but it is these pains and problems that make us grow as Christians saying that all we need is prayers”.

He concluded by reminding Okwuokenye of some people in the country that had gone through similar situations, Revd. Uma Ukpai who lost his children who were sitting inside his car alone when they mistakenly put on the car’s gear and plunged it into the river. Another one was the family that lost their three children in a flight with Sosoliso airline coming from a boarding school in Abuja some years ago and one senator that lost his wife and children to a plane crash, urging him not to despair that great people are ordinary people with extraordinary amount of problems and determination.

Meanwhile residents of Obi Ikenchuku Road have lamented the bad state of roads and the level of damage caused by the gully. Monday David said “For many years, people have not been able to come out with their vehicles and it is getting worse every day, saying it is too deep even to look into as, parts of residential buildings close to the gully have been chopped off. I am advising those living there to move out before it gets worse.

Madam Lawrence Omezue said, “It is unfortunate to lose children who we hope would take care of us in old age due to bad roads that the government has decided to ignore. She said there is a primary school in front of that deep hole, advising that they should stop that school for now as we will not want to hear this kind of bad news again. Mrs. Jennifer Osayi said “This hole has killed our Pastor’s children, even the roads are not good at all, we don’t know what to do, this is where we built our houses, we don’t have another one. Our children go to school every day in this same community; we are always very scared everyday when they go to school. Until they come home our mind is never at rest, we are all pleading with the government to do something about the roads and gully in order to avert more casualties”.

0Shares
0 0
Share
Previous MY MOTHER SACRIFICED HER BED FOR MY EDUCATION -Dr. Mrs Tibi
Next BE CAREFUL OF FLOOD, GOV. OKOWA WARNS DELTANS