LOSSES AND ANGUISH AS FIRE RAZES DOWN RESIDENTIAL BUILDING

It was a pathetic, sorrowful and emotional laden sight to behold the destruction of household items, caused by a fire outbreak which razed down a residential building located at No 2, Obaigbena Lane, off Obaigbena Street, Boji Boji, Owa. 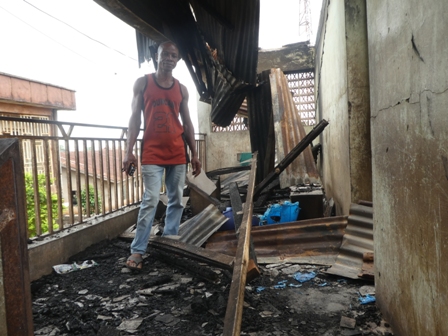 During a visit to the scene of the incident by Ika Weekly Newspaper Reporter on Wednesday June 13, 2018, some Occupants of the building that have been rendered homeless by the fire outbreak were in pains and emotional trauma.

The ugly incident which took place on Tuesday, June 12, 2018, had the one story building severely damaged, with the properties of occupants of the first floor completely burnt to ashes.

Narrating the ugly incident to newsmen, one of the victims, Mr. Andrew Obi, a civil servant and a native of Ute-Okpu, said the fire outbreak was caused by power surge.

Recounting what happened, as he was told by his children who were at home, he said the fire started at around 5:15 pm in the evening and before he came from work, all his documents and properties were burnt completely. Continuing, he stated that for over two months, they have not had electricity supply at Obaigbena lane but it was on the day the disaster happened that Benin Electricity Distribution Company (BEDC) brought light to the area.

When asked by the reporter whether he has reported the incident to the authorities of BEDC, he responded that he was about going to their office when the reporter got to the scene of the disaster. He further disclosed that all the twelve rooms on the first floor were completely destroyed by the inferno.

Another tenant whose properties were destroyed, Mr. Christopher Ifeanyi, a nurse, said the fire started from a spark immediately after BEDC restored power supply to the area. He disclosed that a middle aged woman was rescued from the fiery furnace, explaining that it was with the efforts of sympathizers who were around that the window’s burglary proof was destroyed, from where they brought out the woman, who was already in flames, and rushed her immediately to the hospital. He expressed disappointment at the inability of the Delta State Fire Service to put out the fire when they got to the place while the fire was still burning.

Another victim who also spoke with our reporter, Mr. Victor Nwikwor, a  telephone repairer, said he was not around when the incident occurred, but was at his store when he was called on phone that the house was on fire, and on getting there thick smoke and fire had already engulfed the entire building. He stated that he had to start searching for his Children and fortunately he saw them outside where they were kept by his neighbours, living in another compound. He thanked God for saving the lives of his children, because his wife was also not around when the fire started.

According to one of the victims who spoke on the condition of anonymity said “it is quite unfortunate that the impact of the Delta State Fire Service is not being felt by the populace in most cases when there is fire disaster. It is an error of maximum proportion that the fire service is ill-equipped and handicapped to handle fire outbreak especially in emergency situations, making the masses to lose faith in their services. Hence knowing the importance of their services to humanity, it is wise for the state fire service to demonstrate quick proactive responses to distress calls from the masses in curtailing the menace”.