The D.P.O accompanied by some of the men of the Police Force, was received at the Mbiri palace by the monarch, His Royal Majesty, Dr. Ifeanyichukwu Alekwe, the President General, Mbiri Progressives Union (M.P.U), Dr. John Nwachokor, elders, chiefs, youths and the various vigilante groups in the community.  SEE ALSO: FULANI HERDSMEN ATTACK WOMAN ON HER FARM

While welcoming the D.P.O, Dr. John Nwachokor described Mbiri Community as agrarian peace loving community. He said for the past two years, the people have been in pains as they no longer go to farm because the Fulani herdsmen have taken over their farmlands, committing all kinds of evil. According to him, “Many Mbiri people have abandoned their farmlands for the herdsmen in order not to be killed. Our major challenge is how to tackle the menace of herdsmen on our farmlands as some of us who managed to risk their lives to go to farm only woke one morning to see that the Fulani herdsmen has used their cattle to destroy the farmlands. Sincerely, the Mbiri people are not happy about the inhuman activities of the herdsmen on our community”, he said.

Dr. Nwachokor appealed to SP Jubrin to help fight the dare devil Fulani herdsmen who according to him have taken over their farmlands for peace. 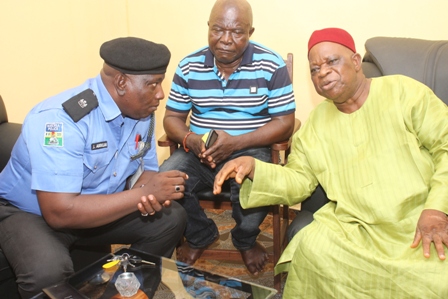 Also, Obi Alekwe, on his part, described the presence of Fulani herdsmen on their farmland as a thorn in their flesh. He attributed the poor harvest over the years as to the handwork of the herdsmen, revealing that it is unfortunate that no farmer in Mbiri Community can boast for a bag of corn in this season of corn produce. He called on the D.P.O for urgent action saying their lives are in danger.

Responding, the D.P.O, Abolahi Jubrin while expressing dissatisfaction over the troubles the Mbiri people had passed in the hands of the Fulani herdsmen, assured them that with his presence that it will be a story of the past, revealing that it was what the community from which he was to Umunede experienced. SEE ALSO:BEYOND THE ACTIVITIES OF FULANI HERDSMEN By Augustine Omilo

Concluding, the D.P.O appealed to Mbiri people to remain law abiding citizens and be friends of the police by giving them information on the hideouts of criminals in their area.

0Shares
0 0
Share
Previous COME TO OUR RESCUE, WE ARE IN DANGER, ALIBIOBA RESIDENTS
Next EDITORIAL:FELICITATION AND AGENDA FOR GOVERNOR OKOWA