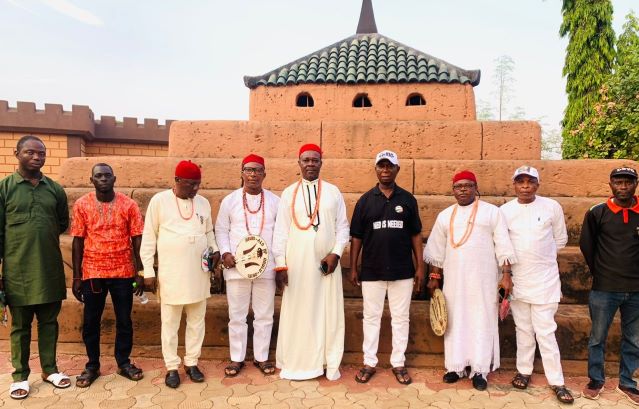 The Ubulu-Okiti traditional council members, led by their king, His Royal Majesty, Obi Edward Isichei, on Wednesday, 14 December, 2022, visited Nwoko, in his country home at Idumuje Ugboko, to openly declare their support for the senatorial candidate.

Speaking, Chief Donald, the Ojubi of Ubulu-Okiti, said that the traditional council has chosen Nwoko to represent them in the senate because they trust his capability to lead, noting that he has represented the people selflessly before, in the House of Representatives, and they trust him to do it again.

Chief Donald said, “Our people say that it is from the looks of firewood you can tell the one that will easily burn to ashes, and the one that can make lasting coals. It is important to understand that the person who knows the road is the person you should send on an errand. Someone who can represent you, someone who is bold enough to speak and people will listen. That is the kind of person you can send on an errand and he will return with results.

“You cannot send a lazy man to the war front to bring the head of a warrior. So, on behalf of Ubulu-Okiti traditional council, the chiefs and our king who is here with us, we have chosen you to represent us in the senate because we know that you are capable. We know that you have done it before in the House of Representatives. Your record is there to speak for you.

Chief Donald added, “we have come, to openly identify with you and give you all the support you need to win the senate, as we continue to pray for you. The Lord will clear the way for you, it will be a seamless election. We thank you for always putting Anioma first. We are grateful for your goodwil.”

Nwoko expressed gratitude and assured productive representation. He, however, urged the traditional council to also throw their support behind other four PDP candidates, maintaining that the party winning the five political offices will make him more productive as a senator.