The battle to reclaim the popular Musa slaughter market, built on government reserved land along Uromi /College road, seems to have gathered momentum as the Agbor Community Union,(ACU) have been drawn into the vortex of the conflict. 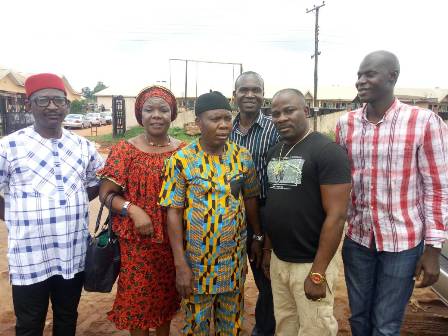 The union led by the President General, Mr. Larry Onyeche, mobilized both youths and community Chiefs to the market place on Thursday, April 19, 2018 to observe the presence of officials from the Ministry of Land and Surveys sent to measure the disputed land which the embattled Mr. Ikpeazu claimed to have purchased. However, the mission of the officials was unsuccessful as some of the Agbor youths who observed fowl play by the officials staged a peaceful protest, saying that they are fed up with the impunity being committed by Mr. Ikpeazu.

The youths, during the protest carried placards with inscriptions consisting of questions such as: “Who sold the land to Alex Ikpeazu?”, “We don’t want the market”, “The land is for Agbor Kingdom”, ” No individual owns a market, “This area is GRA and not an individual market, “where is the pink paper for allocation to Alex Ikpeazu?” amongst others.

The event witnessed a large crowd at the market.  Amongst those present were, Hon. Fred Ofume, Hon. Victor Okoh, NULGE executive led by Comr. Lawrence Onahor, the Council Revenue and Surveyor officers.

The situation triggered by the presence of the aggrieved youths was brought under control by the effort of the member representing Ika South Constituency at the Delta State House of Assembly, Hon. Festus Okoh, who came at the instance of the State Governor, Senator Dr. Ifeanyi Okowa.

Hon. Okoh advised the officials from the Ministry of Land and Survey to reschedule another day for the inspection. He also stated that they should endeavor to come along with their full equipments to carry out their task on the said land.

Speaking with the press, the President General of Agbor Community Union, Mr. Larry Onyeche, posited that the market which was built on the GRA land is illegal, an act which is totally frowned against by the community.

He explained that market is owned by government and not by an individual; hence Agbor Community Union wants the market relocated, for the land to be used for the reason for which it was created.

“The Local Government Council should relocate the market completely as Ikpeazu has no reason to be there,” the President General insisted.

The Deputy President General of the union, Mr. Charles Ekpenisi, on his part frowned against the illegal activities of Ikpeazu on the land, challenging him to come forth with the genuine document to validate his claims to the land.  Meanwhile, the Delta State Government has awarded a Trauma Centre contract, being sited near the said market, where work is now in progress.

0Shares
0 0
Share
Previous COLLEGE OF EDUCATION, AGBOR HOSTS NATIONAL COMMISSION FOR COLLEGES OF EDUCATION
Next OWA-ALIZOMOR COMMUNITY PROTEST: WE ARE NOT IN SUPPORT OF ALFRED IDEHEN