The Chairman, Ika South Local Government Area, Hon. Fred Ofume embarked on a second inspection of an excavation site along Charles street by the Express, accompanied by the H.O.D on Environment, Ika South Council Mr. Eki, and other Council Staff on Monday 31st July 2017 in respect of a petition file by One Mr. Ekiegini Omaghe, against one Mr. Amaechi Igumbor, Chairman, National Union of Road Transport, Workers (N.U.R.T.W) Agbor branch on the excavation of a steeply landed property belonging to Mr. Amaechi Igumbor, who intends to build a motor park at the excavated site, thereby causing a social problem for the community
Mr. Omaghe in his petition stated that the excavation carried out by Mr. Igumbor was done to his perimeter fencing, and the road leading to his house was blocked in the process, adding that the excavation is on the verge of collapsing his fence, threatening to render him homeless.
Giving a detailed account to an Ika Weekly Newspaper Reporter, Hon. Ofume stated that on receiving the complaints by Mr. Omaghe, he was on the verge of collapsing Mr. Igumbor, but was stopped by the petitioner, who insisted that the chairman should visit the site first for a proper inspection, which he did before traveling to Abuja on an Official assignment, in respect to a case between the Council and one Alex Ikpazu the following day. Going further, the chairman also noted that due to his absence on Official duty, he assigned the H.O.D on Environment and the town planning officer to carry out an on the spot assessment. He also registered his displeasure on seeing posts by Mr. Omaghe on social media, accusing the Chairman and the Council of doing nothing concerning the petition, having inspected the site personally and assigning it to the H.O.D before traveling.
The H.O.D on inspecting the site, on Tuesday 25th July 2017, in company of Comrade Amaechi Igumbor called for a meeting with both parties, scheduled to hold on Monday 31st July to be presided over by the Chairman on his return from Abuja.
After the meeting on Monday, the chairman along with other staff as well as Mr. Omaghe and Mr. Igumbor moved to the site, and on getting there, it was discovered that Mr. Omaghe the petitioner’s house is accessed from Ogbewi close and Ezinne Street, noting that the purported closed street is not in use due to the steeply and hilly nature. On seeing the close knitted streets, the Chairman requested to see the plan and approval of the streets, a request which did not go down well with the petitioner Mr. Omaghe. 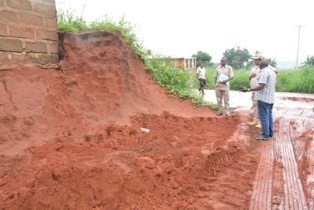 Mr. Omaghe openly berated and questioned the integrity and honesty of the Council with an utterance which according to Hon. Ofume is a slight on him and the entire Council staff. According to the chairman, he swore an oath of office to protect the people, and would not infringe on anybody’s right, even when the land being excavated will be used to build a motor park, and thereby relocate transport workers from Mariere junction by express, and avert the dangers caused by the transporters.
The chairman noted that despite the utterance of the complainant which is a slight on the council and himself, the council will go ahead to discharge their duties without partiality, and uphold their integrity, adding that he will look into the approved plan of the street and the report from the town planners, to assist him in taking a decision on the issue at stake. 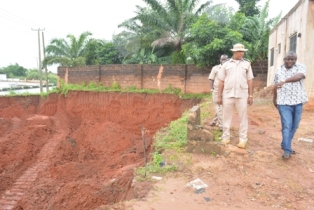