NO ONE HAS RIGHT TO DISSOLVE OTU NMUNNE – Pa Nwagimejen 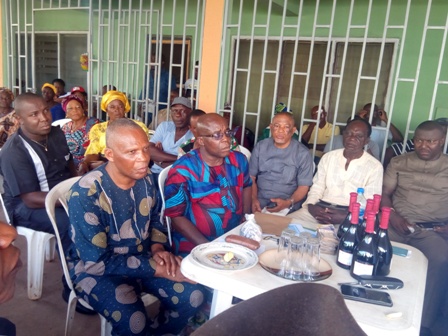 Pa John Nwagimejen, one of the leaders of Otu Nmunne pressure group, and an elder statesman in Ika South Local Government Area of Delta State had on Saturday, 18th of May 2019 asserted that nobody in Ika South Local Government Area has the right to dissolve Otu Nmunne Political Association/pressure group because the constitution of the Federal Republic of Nigeria guarantees freedom of association.
Pa Nwagimejen, while addressing members of Otu Nmunne pressure group during their meeting held at Col. G.A Eboma’s residence at Ime-obi, noted that the pressure group having been registered and certified, is not an “illegal association”.
His words, “Otu Nmunne pressure group was formed for Gov. Ifeanyi Okowa in 2014 when the indicated interest in the Delta State Gubernatorial election. It is not an illegal association because the Constitution of the Federal Republic of Nigeria guarantees freedom of association. So no one in the Local Government Area has the right to dissolve Otu Nmunne or any other pressure group. Gov Okowa will never support such thing because he is a Godly man. We have large followers who are disciplined members”. He then charged anyone working against the group to desist from such.
Also speaking, Hon. Festus Chukwuyem Okoh (a.k.a Chuky Dandy), Member representing Ika South, DTHA pointed out that Otu Nmunne is a pressure group comprising people of like minds from all the 12 federal wards in Ika South L.G.A and anyone is allowed to be a member of the group.
Continuing, he said “Collins Bello is our party chairman, when he calls for meetings, all the pressure groups are expected to attend because we belong to the party, we don’t have problem with his legitimate directives”.
Meanwhile, the group also passed a Vote of Confidence on Gov. Ifeanyi Okowa, Executive governor of Delta State, Hon. Festus Chukwuyem Okoh, member representing Ika South, DTHA, Barr. Chiedu Ebie, Commissioner for Basic and Secondary Education, Barr. Victor Okoh, Chairman of Ika South Local Government Council and all leaders of Otu Nmunne pressure group.
The motion which was moved by Hon. Vincent Agboegbulem, the former secretary of Ika South LGA was seconded by Hon. Davidson Okafor, and unianimously accepted by all members of Otu Nmunne pressure group. Hon. Agboegbulem revealed that the group has come to stay after being in existence for more than four years when Ika South L.G.A was passing through serious political trauma, he reiterated the narration Festus Oboh to Otu Nmunne members that the Governor does not have a hand in the proscription of all preasure groups in Ika South.
Speaking further, he said, “political pressure groups will remain in as much as they align themselves to mainstream PDP, Ika South Local Government Chapter ”
Hon. Godwin Ezedom, the secretary of the group and special assistance to Gov. Okowa, also called on the public to discountenance any rumour making the wave that the group is having problem with PDP, adding that “we are one and we cannot be divided. Any house that fights against itself is bound to fail”.
He noted that the group recognizes the party supremacy, asserting that the group is not a substitute to the party but it is just a pressure group which they have transformed into a multipurpose Cooperative society. He also disclosed that the group is making plans to empower people in different areas as a way of further extending the dividends of democracy to the populace since government cannot reach everybody at the same time.

0Shares
0 0
Share
Previous PRESS FREEDOM; FACT OR FICTION? BY UTOMI
Next I DO NOT GIVE NOR TAKE BRIBE IN MY LEGAL PRACTICE – DUNKWU