In an interview with Ika Weekly reporter on Wednesday 10th June, 2020 Master Umar disclosed that his father is a designer, and watching him sew, ignited his interest into becoming a fashion designer as well. He stated that he learnt from his father voluntarily and informally by constantly watching him sew.

The youngest designer pointed out that he has been a designer for just three years and have sewn for a lot of persons. According to him, he can sew all kinds of male wears to include ‘senator,’ simple traditional wears, and agbada for both sexes. He charges moderately as asserted by him. 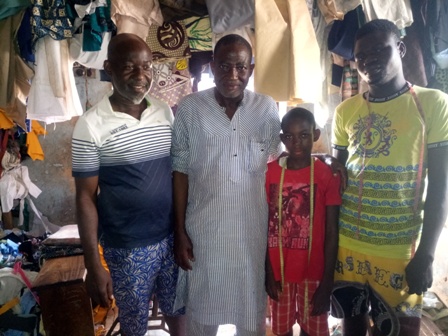 Continuing, the fashion designer urged teenagers and juveniles to pick up any skill of their choice and be useful to themselves, saying that the skills he has acquired has really been of benefit to him, especially now that schools have been shutdown. He asserted that no skill acquired is useless. Using this medium also, he appealed to the government, spirited individuals and non-governmental organizations to assist him to expand his shop and get modern facilities for the smooth running of his job.

Speaking also, the father of Saadiq an indigene of Bauchi State, based in Agbor, Mr. Umar, disclosed that he has been a designer for 40 years, but has never attempted in any way to forcefully co-opt any of his children into it. He pointed out that his last son, Saadiq indicated interest out of his own volition, saying that he didn’t know the boy would learn this fast.

According to Saadiq Umar, the youngest designer, he decided to join the fashion world in order to be useful to himself and the society at large.

An Ijebu tradomedical practitioner based in Agbor, Dr Yomi Hassan, in a chat with Ika Weekly reporter on Wednesday 10th June, 2020 stated that patients no longer visit Central Hospital for the fear of being tagged COVID-19 patients. He disclosed that after the announcement of suspected cases of coronavirus in many government hospitals, patients take to their heels and now patronise patent medicine stores and tradio-medical practitioners.

Speaking further, he pointed out that a lot of patients, who are allegedly said to have contracted the virus, are never given their test result t0o see for themselves to confirm their status.         According to Dr. Hassan COVID-19, COVID-19 is real, but the government has commercialized it for selfish interest, saying that it is now the business of the day.

The trado-medical practitioner noted that few weeks ago, Onions market was declared shutdown by the local government, owing to the fact that one of the traders was allegedly said to have died of the virus. .

Dr. Hassan said that medical practitioners who are tagging patients’ coronavirus carriers are the ones in danger if at all there is any record of such, because they will be the ones to contract it first before others. He noted that when HIV broke out, it was a terror to all, but that people have now adopted it and are living with it. In his words, “so shall the case of coronavirus be.”

On a different development, he expressed sadness as COVID-19 team in charge of enforcing the use of face masks are fully armed, asking if  they are combating COVID-19 with weapons.

The growth, prosperity and national security of any country says development practitioners are critically dependent …