NOW I KNOW, PROPHETS ARE RECOGNISED AT HOME- Governor Okowa

Overwhelmed by the massive show of love by Anioma people at the grand reception held in his honour by Anioma Nation on Saturday 21st April, 2018, Governor Ifeanyi Okowa has stated that he now knows that prophets are honoured and recognized at home, contrary to the popular saying that prophets are not recognized in their home town. 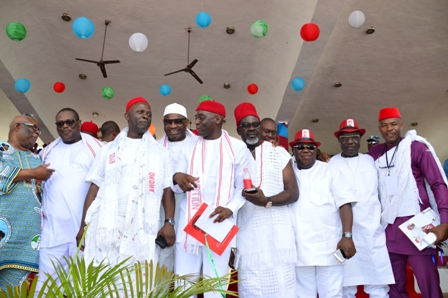 The reception which recorded an unprecedented crowd of women, men and youths alike and endorsement by various ethnic nationalities in solidarity with Anioma people was held at the Cenotaph Asaba. 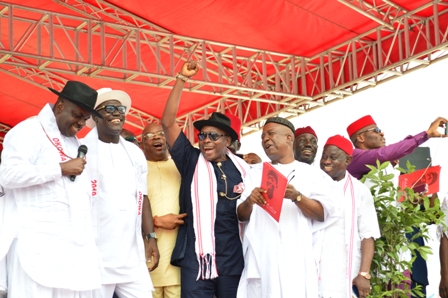 Isoko Nation speaking in solidarity celebrated Governor Okowa, describing him a detribalized governor whose developmental stride across the State makes them proud as a people.

In the same vein, the President of Urhobo Political Union, (UPU) represented by his Vice, congratulated Governor Okowa on behalf of the Urhobo Nation, stating that there is no greater honour than for one to be recognized and honoured by his people. They stated that Delta State is strengthened by religious, political, social and cultural connections, affirming that together, they will achieve a united Delta, hence their resolve to unite as one Delta to develop the State.

Other ethnic nationalities such as Ndokwa nation, Itsekiri nation, Delta North traditional rulers who delivered their goodwill message, congratulating the Governor on being honoured by his people, pledged their unalloyed support for the Governor. They stated that the endorsement by the various Ethnic Nationalities shows that the Governor has done well and deserves a second tenure to continue the projects he has started. Speaking on behalf of Ika Ethnic Nationality, the Head, Collective leadership of Onu Ika, Mr. Dan Usifoh , said a winning team is not changed, thereby implying that the 2nd tenure of the Governor is sure. 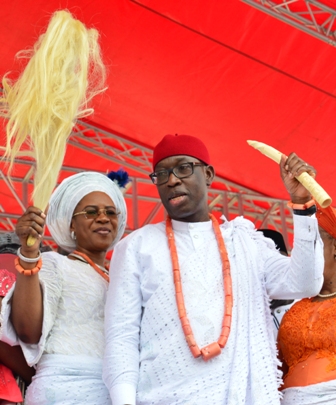 Chief James Ibori assured the crowd that his vote and that of members of his family belongs to Governor Okowa, adding that the people of Ethiope West will vote massively for him.  He stated that Anioma people are not to be taken for granted, hence as they have spoken by endorsing their son the Governor as the sole candidate for the 2019 governorship election, they will abide by it, and stick with equity and fairness.

Also delivering their good will messages, Governor Wike, Senator Ike Ekweremadu and Prince Uche Secondus in their separate remarks urged Governor Okowa to prepare for his swearing in, as they expressed optimism that he is going for a 2nd term, going by the massive turn out and outpour of love shown to him by his people.  They applauded him for his developmental strides in the state especially in road construction which has earned him a nick name (The Road Master).

Governor Okowa appreciating Anioma people for the honour bestowed on him acknowledged that Prof. Sam Oyovbwarie was the engine room of the movement that saw him emerge Governor of the State. In his Words, “today my people of Anioma have put together this, it is something I will cherish continually for it is a good thing, and I appreciate all those who helped put this event together, particularly, Senator Peter Nwaoboshi.

In 2015, Delta State did something which has strengthened the unity of our people, that though we are a state of many ethnic nationalities, we are one people, connected by one God.  And by the special grace of God, we have made a statement by the electioneering campaigns that we believe we are one Delta and one people, one State, and they voted me as Governor,  not minding that I come from a small place in Ika, not minding that Anioma may not be the most populous area in Delta State, they realized that if the unity of Delta was to remain strong and not threatened, the right decisions must be taken, and through that vote, as the governorship candidate of the PDP, I won in number of total votes casts, won in the total votes cast in Urhobo land ahead of other Urhobo  sons who were in the race, I won in the total votes cast in Itsekiri, Ijaw, Isoko and the majority, nearly all votes cast in Anioma”.

He stated that the show of love by people of the region has convinced him that indeed, prophets are recognized at home. He vowed to continue to be a vessel unto honour to his people