EDITORIAL: OUR WORRIES ABOUT NATIONAL ASSEMBLY

It was indeed a day to remember as HRM Obi-Ezenwali Alioma Collins visited Dallas, Texas. The Ika community in the Dallas/Fort Worth Metroplex was blessed to receive wise counsels from someone known to the world, a revered leader, the Obi of Otolokpo Kingdom in Ika North East Local Government Area of Delta State, Nigeria.

HRM was ushered into the reception hall by the “Otu Omenana Ndi Igbo Na Ana Igbo DFW USA”, all dressed up in traditional regalia. Everyone wanted to shake his hands because most of us have never met him before but only heard of his exemplary service as one of the young Rulers in our homeland. 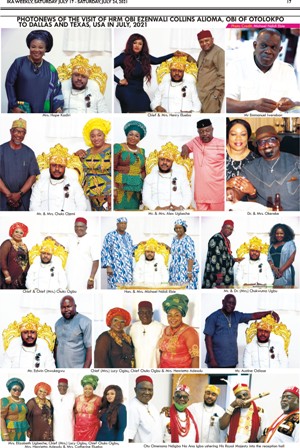 He was impeccably dressed and very personable. Those present at the reception were not disappointed as his personality radiated through the reception hall.

Amongst those present, to grace, the occasion was yours truly Hon. Michael Ndidi Ebie, along with my lovely wife, Mrs. Lita Ebie; Engr. & Mrs. David Nwabuisi (owners of the host venue); Mr.&Mrs. Chuks Ojemi; Chief & Mrs. Henry Eluebo (Mrs. Catherine Eluebo – a daughter of Otolokpo Kingdom); Mr. Edwin Onwukegwu, a son of Otolokpo Kingdom, and a host of others too numerous to mention.

Throughout his visit and travels within the United States of America, HRM was apprised of the level of frustration the Ika indigenes in Diaspora feel, particularly the lack of progress in our homeland. We hear about the sufferings of our people, the dilapidated infrastructures, inaccessible roads, decay in educational prowess of our youths, the lack of jobs for our graduates, etc. To these myriads of issues, HRM was quick to share bits of wisdom and information he thought would be helpful to us in alleviating our concerns and our views of the lack of progress as were narrated to him by many.

In his usual calm and reassuring demeanor, he urged us not to give up hope, but instead to rally around our son, Senator (Dr.) Ifeanyi Okowa – the Executive Governor of Delta State whom he said is doing everything possible to develop our state. He asked that the contractors in the state should endeavor to do the jobs given to them to specifications. Additionally, he said we should do all we can to liaise with our kinfolks at home.

According to him, we all have a stake in ensuring that Ika land and her people are never forgotten. As the saying goes, “Alionyewuundua”, and “Onye Donzi Ihien, Orina Nma”.Among the many places, HRM visited was Atlanta, Georgia. Wherever he went, HRM was warmly received by Ika community.

We were greatly honored by his visit, and his wise counsels will remain indelible in our hearts. We thank God for his life; we love him and wish him well. Obi Agwu! May you Live Long!! Long Live Ika Land!!!

0Shares
0 0
Share
Previous WE YET TO FEEL THE IMPACT OF NWOKOLO, CHUKY-DANDY, ELEKEOKWURI – Irunkwor
Next PIB BILL; I EXPECTED NIGER DELTA LAWMAKERS TO STAGE A WALKOUT – Comrade Evah 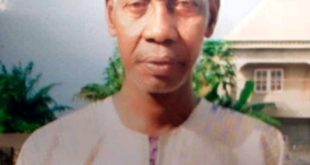 A community leader, trado-medical practitioner, Mr. Friday Irunkwor has frowned at what he described as …