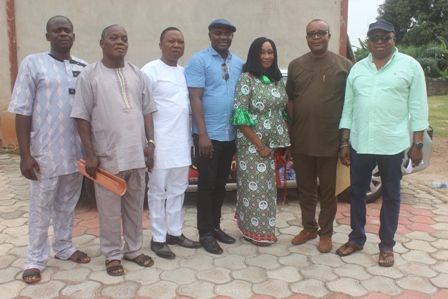 In his remarks, Chief Ogadi congratulated Ebonka and thanked the party wards leaders and delegates for the peaceful conduct of the primaries. According to him, “I am happy with the way things are going well in the party, and I am also rest assured that with the collective and continued support of every party faithful that the party in her usual way will continue to emerge victorious in all elections. Let us all (party members) remain committed”, he appealed.
The State Returning Officer of the party, Mr. Raymond Edijala while declaring Barr. Ebonka as the PDP Chairmanship candidate for the forthcoming council poll praised the peaceful conduct of the primary elections. He congratulated Ebonka and called for a continued support for Governor Ifeanyi Okowa.
Responding, Barr. Ebonka appreciated the leaders and members of the party for finding him worthy to bear the party flag. He solicited for their continued support, assuring them that he is not going to disappoint them and the entire people of Ika North East if he is voted into office.