A non-profit, non-governmental organization, The Obi Ikenchukwu Foundation, (OIF) established in honour of the late Agbor Monarch, Obi Ikenchukwu I and his Queen Grace Ikenchukwu, to give hope and make life worth living for people, has demonstrated her love to children in Agbor. 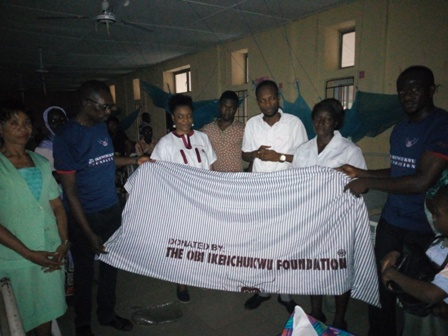 The Foundation, led by solicitor and founder, Princess Genevieve Ikenchukwu, in the euphoria of Christmas visited the Central Hospital, Agbor recently to donate about 50 bed sheets and pillow cases to the pediatric ward of the hospital, after which a Christmas Party which had in attendance children of Divine and Prolabre Dei Orphanages in Agbor, was organized within the hospital’s premises for the children to enjoy the Foundation’s gesture which can only be described as unique. 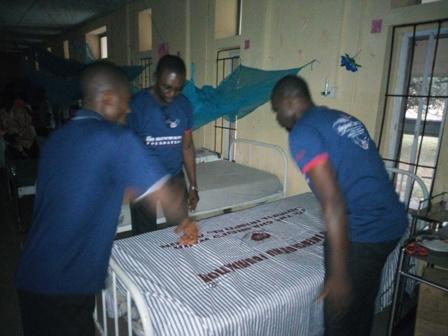 It was indeed a huge success as the children were filled with excitement as they went home with beautiful gift items shared among them by the Foundation’s ‘Father Christmas.’
In her address, Princess Genevieve Ikenchukwu said she was delighted to execute on the mission statement of the Foundation of giving back to the society.
She explained that their gesture was an effort to help sick children on admission of Christmas just as other children in their family.
According to her, “Christmas is a time to give. More importantly, it is a time to reflect on the love of God which is what we at the OIF are hoping to achieve by spending time with these children. We hope that they will understand and enjoy what Christmas is all about”
Going further, she gave a message on behalf of the Dein of Agbor Kingdom, HRM, (Dr.) Benjamin Ikenchukwu, who wished the children and his entire subjects a merry Christmas celebration and a prosperous New Year.
Earlier, Dr. Tanunor Irowerisime, who had received the loads of bed sheets and pillows on behalf of the hospital management and staff, gave a warm hearty thanks to the Princess and her Foundation for coming to show love to the hospital particularly the Pediatric ward, before Christmas.
He encouraged the Foundation to continue in their goodwill and prayed God to replenish their pockets with more resources. Also speaking, Rev. Fr. Joseph Ugboh, Parish Priest of St. Columbus Catholic Church, Ime-Obi, Agbor, said for the OIF to remember children especially those in the hospital was wonderful, saying that such a gesture was good to reckon with. He appreciated the Foundation team and prayed that God should bless them.

0Shares
0 0
Share
Previous HARVEST THANKSGIVING IS NOT A MEANS OF FUND RAISING
Next BOOK REVIEW: “THE ‘MAN CENTRAL’, STEVE ASHIEN…” BY DR.TIBI