Agbor-Gha-Ihun Security outfit on Wednesday, April 29, 2020 paraded a 37-year-old man and a father of 3 who gave his name as Godstime Okon from Ime-Obi, Agbor for defiling a girl of seven.

Addressing journalists, the Chairman of the security group, Mr. Monday Kiyem described Okon as a rapist and a wicked man who only thinks of committing evil. He advised parents with little female children to be mindful of strange male visitors they welcome into their homes as some of them are philanderers .

He assured that Okon would face the wrath of the law for the shameless and abominable act of sleeping with a minor, and admonished  youths not to engage in acts that will tarnish their reputation for life.

Meanwhile, Okon an Okada rider who was caught in the act, confessed that he had slept with the little girl twice. He stated that he started having canal knowledge of her few days after his visit to her family house; having forced her to massage his penis.

The victim, a primary 2 pupil said that Okon had penetrated her twice and gave her #250 on the two occasions.

As at the time of filing this report, Okon, had already been handed over to the police in Agbor Police Divisional Headquarters for further investigations.

Members of Delta North Security Network on Friday, April 24, 2020 smoked out four suspected thieves who had allegedly been burgling shops in Agbor during the lockdown. The burglars are, Onyeka Osunde, a butcher from Ime-Obi Agbor; Tony Utalor, a block moulder from Agbor-Nta; Frank Reuben from Alisimie; and Eric Friday, a butcher from Owa-Alero.

Addressing journalists, the Vigilante Commander, Mr. Friday Okoh said that Onyeka Osunde who was the first to be caught, was apprehended for stealing a pair of female trousers in his compound. It was during interrogation that he confessed his involvement in burgling shops with his gang members. He said the lockdown provided them the opportunity to do so. 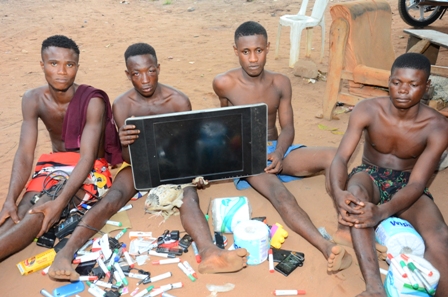 Mr. Okoh informed the press that three members of Osunde’s gang have been apprehended, whilst others are still at large. He stated that there is no hiding place for criminal minded persons in Ịka South. He therefore admonished the youths to engage themselves meaningfully as criminality will only endanger their lives.

One of the culprits, Frank Reuben said he only took part in burgling Orogodo Primary School, Agbor and wondered why Onyeka Osunde would bring that up since it had nothing to do with his stealing a lady’s trousers.

While others pleaded guilty and begged for forgiveness,  Eric Friday claimed he was innocent, revealing that he had on several occasions warned Onyeka Osunde to desist from stealing.

Residents, who were at the scene to watch the hoodlums being paraded, applauded members of Delta North Security Network for their doggedness to duty.