Breaking News
Home - ENTERTAINMENT - ONE ON ONE WITH THE COMEDIAN; DOME BRIGHT

ONE ON ONE WITH THE COMEDIAN; DOME BRIGHT

Tell us About Your Educational background?

I attended Ijehon Primary School, Umunede and Shalom Nursery/Primary School. I then Proceeded to Top Grade College for my secondary education and then went on to College Of Education to study Biology And Chemistry Education. In year 2011, I got admission to Delta State University (Delsu) Abraka where I studied Biology Education  and graduated in 2014. After graduation I taught at Ezemu Girls Grammar School, Ubulu-Ukwu and Ideal Mind Secondary School, Onitsha.

What made you to take up Comedy?

I was discovered on the 26th day of December 2017 during the Ika Carnival organized by Hon. Sebastine Okoh in Agbor. Amongst over 30 comedians, I emerged one of the top five best Ika Comedians.  That was my first time of handling a microphone and ever since then, I have built the talent and made a brand out of it. I was fortunate to come across (Francis Agodah) a.k.a, “I Go Die” a renowned comedian who gave me a remarkable platform to project myself and build on, ever since then its been success all the way.

How Has The Comedy Business Been So Far?

It has been very nice I must say. At that Ika Carnival amongst the five comedians chosen, I took the fourth position. The first, second and third positions were awarded gifts and cash prizes. After that event where I was discovered, I have gone for several other comedy competitions, which include Gordons, the Comedy Berlusconi, Ali Baba Spontaneity among others. There was a competition I went for in Anambra State hosted by True Leaders of Africa, It was called “Happy Hour Comedy Competition” and I was given an award as the Best Comedian. 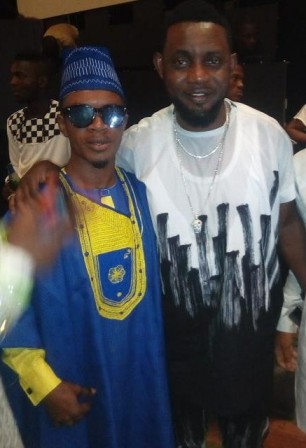 What Are the Challenges present in your Career as a comedian?

The major challenge is finance as well as getting sponsors to promote the brand “Dome Bright”.

You Mentioned Studying Biology and Chemistry, have you abandoned that now for Comedy?

Well this is Nigeria, education is truly the key as it is being said, but when I graduated, I found out that politicians have changed the padlock. I am still with the key but the padlock have been changed, what can I do?  I have not abandoned my course of study. Comedy and music are inherent gifts from God. They are better than what we give ourselves. I like Education so well but the present situation of the country’s economy has not been fair to those who acquired certificates. I am very happy and excited whenever i am with the microphone; that is passion.

Have You Received Any form of Assistance From Any Individual or Corporate organisations ?

I do not usually get any form of assistance from anybody while planning for my events, but after the events I often get some sorts of assistance. Sometimes ago, when I brought “Erigga” a popular musician to Umunede, the crowd was massive.  I did not know there could be so much crowd in Umunede, that day and Hon. Sebastine  Okoh whom I never expected to come around, saw the massive crowd and for that reason gave me One Hundred Thousand Naira(N100,000). That was the first   assistance i ever got. The Obi of Umunede sent for me after the event and prayed for me. I went with Erigga, he blessed us and gave us gifts. Even after my last event, I got several supports but I would prefer those supports come before the event so it can help me plan better, as it is done in bigger events.

In what way can the government /corporate bodies be of assistance to your brand?

The Government, Corporate bodies and individuals can help in so many ways. For instance my next event is going to be on the 5th January 2020, I am bringing “I GO Die” and “Wizboy” a popular comedian and musician respectively to Ika nation. I need sponsorship and partnership; I cannot do it alone. If these organisations come in and play the needed role in these events I am trying to put up, entertainment will tremendously grow likewise reduce unemployment, youth restiveness, cyber crimes, armed robbery and poverty in Ika nation.  Just as Ika Weekly partnered and supported me in my last event, other bodies should please support the brand and help settle one financial challenge or the other amongst numerous challenges that goes with planning an event. All I need from corporate bodies or government is simply, sponsorship.

You have mentioned Sebastine Okoh a number of times; does that mean he has so much influence on you?

I am not a politician so I cannot be influenced by any of them. But,  I know Hon. Sebastine Okoh as a generous giver, who knows how to appreciate people, a lover of entertainment and also very accessible. I can refer to him as a mentor.

Do you have any political affiliation since you are not a politician?

No I am not affiliated to any political party; I belong to the Masses Party of Nigeria. I vote for my God.

Who Are Your Target Audience?

My target audience includes people from 18years and above. Most times, I use my comedy to indirectly talk to people I cannot address directly. I make satire of our economic and political situations and jokingly pass my message across to them.

Can We therefore Refer to Comedians as the People’s Voice, if Yes, How Have You Been Able to Play That Role?

Of course a comedian should be a loud voice for the people because everyone listens to them. One of my online Videos, a satire on the difference between APC and PDP made so much downloads on the internet nationwide. Several politicians downloaded it and I know how the number of calls and recognition I got after that video. As a comedian, I have come to know that “if one talks; one will die, If one does not talk; one will still die, so let one talk and die”.

What is Your Advice for up-Coming Comedians in Ika Land?

Every upcoming comedian should strive to be creative and desist from using other persons joke, be humble and respectful to people. Above all, they should entrust their lives to God as he remains the secret of every Man’s success.

Can You Mention A Few Other Comedians In Ika Land That Are Also Doing Very Well?

Yes, I met a few of them during Ika Carnival; MC Chop Money, MC Laughter mouth, MC Napoleon, MC White Bishop, MC 2baba, Responsible and others. These are people who work round the clock; they do not depend on anybody to survive.

Recently, the rate of suicide has been on the increase, as a comedian, what suggestion do you have to salvage the situation?

People should often try as much as possible to do what makes them happy. Rather than thinking of how to commit suicide; they should involve in meaningful enterprises: learn a trade or skill for a better tomorrow. I have a hand-work and a shop, whenever I am not out for a comedy show, I work at my shop. The youths should stay away from intake of hard drugs.

Many believe that those in the Entertainment Industry Are Involved In Hard Drugs, What’s Your Take on That?

Taking of hard drugs does not yield anything good. Yes, some are into it but many of them pretend to be involved in it so as to feel among or gain recognition. Those who are truly into it should desist from it; there is no gain in it.

What Will You Say About the Illegal Migration Among the Youths in Ika Land?

I totally do not support illegal migration. It is not necessarily bad for one to look for greener pasture in other countries but it should be done the right way.

What Should Your Fans Expect From You?

They should expect more creativity and quality shows from me as well as continuous drive for the growth of entertainment in Ika nation.

Tell us About Your recent International Award Night of Honors?

God made it very successful. Most of the persons I gave award, do not even know me. I gave awards to those who contributed and supported the entertainment industry in Ika land. It is all to appreciate their efforts towards making entertainment in Ika nation attractive and lucrative.