The Mouth Piece of Ika Ethinic Nationality, Onu Ika, led by Mr. Daniel Usifoh has taken the campaign against human trafficking and illegal migration in Ika land a step further by carrying out a sensitization programme with the Nigerian Immigration Service.

The one day sensitization/workshop aimed at creating awareness on the role and place of the Nigerian Immigration Service (NIS), citizens and non-citizens took place on Thursday 15th November 2018, in the midst of rigorous campaign by Onu Ika against human trafficking in Ika land and Delta North at large. 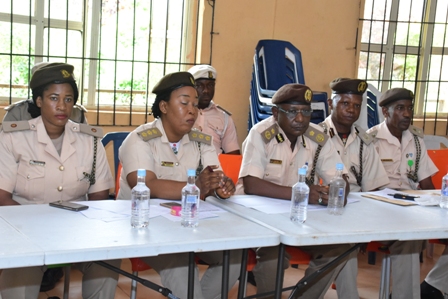 Giving a lecture on “The Menace of Trafficking in Persons, Illegal Migration and Migrants Smuggling on National security, D.C Muazu Abdulrazaq, PCC I/C investigation compliance, mentioned that the NIS is a government agency primarily established for migration related matters.  He stated that Immigration is the concern of the service, explaining that they are concerned with the control of persons entering and exiting Nigeria through the three points of entry; land, air and sea. He pointed out that the NIS is in charge of issuance of valid and genuine passport to Nigerians and Non Nigerians who come in and leave the country.  He stated that those caught travelling with illegal documents will be arrested.

The DC opined that immigration is not a bad phenomenon, but migrating illegally is a menace which the NIS is out to checkmate.  He disclosed that Nigerians wishing to travel outside the country should posses the Nigerian Standard passport. Other passports obtainable in Nigeria according to him are the national passport and the diplomatic passport used by top government officials and first class traditional rulers. He also disclosed that the service issues resident permit to foreigners who come into the country on the basis of work or any other endeavour.

He urged anyone who wants to travel or come into the country to follow the laid down rules and procedures. He said another function of the service is to control the borders leading into Nigeria, enforcement of laws and regulation amongst other functions. He opined that the NIS collaborates with the Ministry of foreign affairs, ministry of interiors, Nigerian Custom Service, NAPTIP and other agencies in enforcing laws.

Speaking on the efforts of NAPTIP in the fight against human trafficking, the Zonal Commander of Edo/Delta Command, Barr. Nduka Nwenwenne, disclosed that about 70 persons involved in the menace have been convicted. He stated that the fight against trafficking is a collective effort by all, adding that NAPTIP has collaborated with the NIS to apprehend human traffickers and the rescue of victims.

He described human trafficking as one of the most lucrative illegal businesses in the country, explaining that everyone must join hands with them to combat it totally. He pointed out that since the Oba of Benin, Oba Ewuare 11 placed a curse on human traffickers in Benin, and the menace has reduced drastically, with attention now shifted to Delta state.

The head, Collective leadership of Onu Ika, Mr. Daniel Usifoh said the sensitization was necessitated by the prevailing system of illegal migration by Ika people.

Present at the workshop were; members of Onu Ika,  Chairman, Landlords and Landladies Association, Ika South, Mr. Vincent Arimoku, President Generals of the clans in Ika land, National Union of Road Transport Workers, Market women,  Libya/Italy  returnees, youth bodies, and so many others.