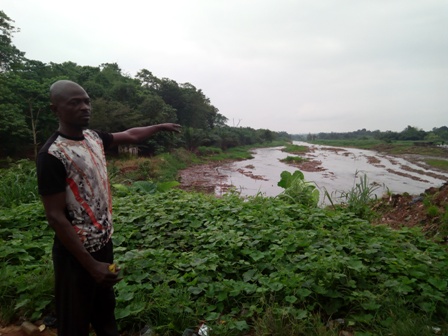 Ika residents, especially those who ply their trade around the so much talked about Orogodo river have decried the present state of the river, describing it as being worse than it was before the supposed dredging or desilting carried out on the Orogodo river by the Ministry of Environment a months ago.

They made the assertion during a chat with an Ika Weekly reporter who visited the Orogodo river last week. One of the residents who spoke to us, Mr. Steve Agu said the desilting of the river has only worsened the state of the Orogodo river, as some parts of the river now stagnated, impeding free flow of water which has always been before the desilting.
According to Mr. Agu, the work carried out by the Ministry of Environment is futile, as water no longer flow well, and hence the purpose for embarking on the project has been defeated.
In his words, “they worsened the situation of the river; the water no longer flows well, as their purpose of carrying out the project was to channel water properly, but now they have worsened it.”
He called on the government to do a proper work on the Orogodo river; as the bridge is on the verge of collapsing, judging from portions of the bridge which have started to give way gradually. Mr. Agu charged the state government to do a proper job, so that the people of Ika nation can commend them properly for a job well done.
Another resident, popularly known as Alhaji, a car wash operator who washes cars by the river said the water from the Orogodo river is no longer as neat as it used to be before the dredging, as the heap of sand dredged out from the Orogodo river is now gradually finding its way back to the river. In his words, “ I always fetch water from the Orogodo river to wash cars, and since the dredging, the water we fetch from there is always sandy, it is no longer as neat as it used to be. The water level is no longer deep because the sand is finding its way back. Something worth doing is worth doing well, if the Ministry of Environment actually wanted to do a good job, they would have disposed off the heaps of sand they left by the Orogodo river bank. Now the heaps of sand impedes our sight, and the sand is gradually taking over the Orogodo river.
He commended the government for embarking on the project in the first place, but urged them to do a more efficient work which will stand the test of time.
Other residents around the area called on the state government to look into the portions of the bridge which are gradually breaking, to avoid a collapse of the bridge in no distant time.