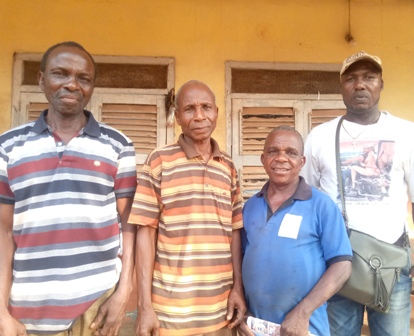 A patient at Uweifo Community Orthopaedic Nursing Home, Ewuru in Ika South Local Government Area of Delta State, Mr. Eze Onyebuchi, on Monday, December 11, 2022, apologised to members of Ewuru Community in particular and Ika Nation in general for erroneously stating that since last year he was admitted to the hospital as an accident victim, no association or group of people have ever done what members of the Boji-Boji Forum did for them.

Mr. Eze Onyebuchi who is a native of Igbo, made this statement while addressing Ika Weekly Newspaper reporter during the official visit of members of the Boji-Boji Forum, led by Mr. Chuks Iku, on Friday, December 13, 2021, the group donated some food items to the patients of the Nursing Home.

The said report, with the caption, “We Are Suffering, Dying In Silence, Patient Cries Out As Boji-Boji Forum Visits Ewuru Orthopaedic Home”, was published on the back page of the newspaper of our edition of Saturday, January 8 to Saturday, January 15, 2022.

Speaking further, Mr. Eze Onyebuchi said although people and organisations have been visiting, but said none of them has come with food items and others like Boji Boji Forum.

Appealing to the community and Ika nation, the patient said his statement was not intentional, saying that his major reason for making such comment was to attract the attention of the Government to the Nursing Home, and not to tarnish the image and reputation of anyone or group of persons. He then passionately appealed to the people to have mercy on him, considering his health condition.

Continuing, he commended Prophet Joseph Igbodo and one Amore Foundation for their support and regular donations to the hospital.

Also speaking, Mr. Chuks Ashien, on behalf of the community stated that they were disappointed in Mr. Eze Onyebuchi over his statement, saying that someone like Prophet Joseph Igbodo comes to the hospital every month to donate food items and money to them.

He stated that what pained him most was that each time Prophet Igbodo comes to make donations, he usually gives double of the items he brought to Mr. Eze due to the fact that his two legs got broken during the fatal accident he had since he has not and started walking well with his legs.

In addition, he on behalf of the community apologized to Prophet Igbodo to disregard whatever statement Mr. Eze Onyebuchi made in the said Newspaper publication.