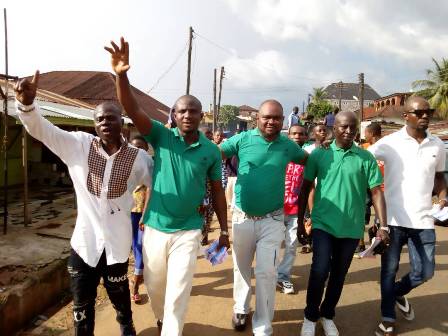 It was a colourful rally with hundreds of Ika youths hitting the streets to orientate and sensitize people on the need to get their voter’s card and exercise their right to choose leaders for proper representation.

Otu Oghanihu Ika also spoke on the need to shun cultism, kidnapping, crime, and every form of violence, stating that the time has come for Ika land to experience peace and prosperity.

Speaking to members of Ika Weekly news crew, the chairman of Otu Oghanihu Ika group, Sunday Agbogwe aka, Sunny Bobo, echoed the fact that the group is out to orient Ika people on the need to keep Ika land clean and to avoid dumping of refuse in drainage and embrace proper sanitation to save the town from erosion.

He also commended the leadership of Governor Ifeanyi Okowa, stating that his SMART agenda is a programme that all and sundry should support to enable not just Ika land, but the whole of Delta State to witness unprecedented development.