The thirty lock up stores and three hundred open shops of Owa-Alero Community Ultra Modern market have been opened and allocated to traders for daily business activities.

Speaking during the market opening ceremony on Tuesday October 30, 2018 the chairman, Ika North East Local Government Council, Hon. Barr. Victor Eghen Ebonka charged the traders to ensure that the market’s environment is kept clean at all times. He said the market which was built for all Ika residents and beyond by His Excellency, Senator Dr. Ifeanyi Okowa, the Executive Governor of Delta State and an illustrious son of Owa kingdom, is an ultra modern market with global standards of thirty lock up stores, 300 open shops, cold Room, Conference Hall, Water Borehole, Modern Landscaping, Automatic Fire Extinguisher with other modern equipment that will add values to the business and social economic activities in the area. 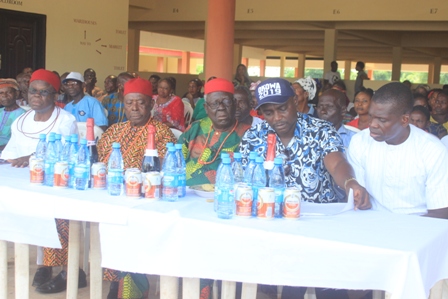 Speaking further, the council boss, said the Governor has also made available some security personnel under the leadership of Chief Josiah Eboagwu, the Ezeanwonwata of Owa kingdom to secure and take good care of the daily affairs of the market. Worthy of note, the council boss, informed the traders that those who will occupy the lock up stores will pay the sum of three thousand naira (N3,000) per year while those for the open shops will pay the sum of one thousand five hundred naira (N1,500) only per year.

He concluded by calling on all Ika residents and Deltans at large to support the 2019 re-election bid of Governor Ifeanyi Okowa and all candidates of the ruling People’s Democratic Party (PDP) across Delta State. READ ALSO : MUSA MARKET OWNERSHIP TUSSLE: ENOUGH OF ALEX IKPEAZUN IMPUNITY &#8211; Agbor Community Protests

He advised the traders to always dump their refuse in the refuse waste bins he provided for the market free of charge, as arrangement has been made with the PSPs that will be coming to the market on weekly basis to evacuate the refuse to enhance a clean environment for their business activities.

Also speaking, on behalf of His Royal Majesty, Dr. Emmanuel Efeizomor II,(JP) OON, the Obi of Owa kingdom, Chief Ignatius Agidi and Hon. Justice S.A. Ehiwarior commended the Delta State Governor for coming to the aid of the market men and women whom they said have been suffering trading on bare floor at the roundabout of Owa Alero community. The custodian chiefs who officially represented the royal father at the event described the Ultra-Modern market a new dawn to Owa people in particular, Ika nation and Delta State at large as it will boost the social economic growth and activities in the area.

On his own part, the Okparan-Uku of Owa-Alero, Elder Victor Opia said he is the happiest man on earth to witness all the good things Governor Ifeanyi Okowa has been doing in Owa-Alero and Delta State in general. He therefore prayed God to continue to watch over him and lift him up above his political opponents in 2019.

In a vote of thanks, the leader of Ika North East Legislative Arm and Councillor representing Owa-Alero ward 2 A, Rt. Hon. Moris Nwadibie, on behalf of the good residents of his constituency, appreciated the State Governor for building and donating the Ultramodern Market to alleviate the sufferings of the people. He commended the executive chairman of Ika North East Local Government Council, Hon. Barr. Victor Ebonka for a job well done in the Local Government Area.