The owners of the land at Ekwu-Efume, Owa- Ekei Community in Ika North East Local Government Area on Saturday, November 18, 2017 held a peaceful protest against the forceful acquisition of their land, describing the act as unjust. 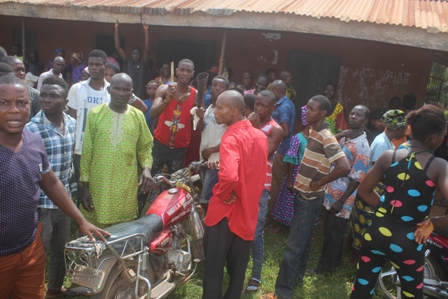 The protest was as a result of the detention of the new chairman, land owners at Ekwu-Efume, Mrs. Amechi Nyemnkem nee Melekwe, and the Secretary, Simeon Ogbute on Friday November 17, 2017 at Owa-Oyibu Divisional Police Headquarters. However, the protesters accused Chief Augustine Melekwe, the Okirigwe of Owa Kingdom as the architect of the crisis, insisting that the land in question, which they described as their ancestral land belongs to them. They lamented, “We are using this forum to decry the misrepresentation of some Owa-Ekei chiefs for their selfish gains. This is unfair and unjust. Their act is the major cause of the underdevelopment of our dear community”. The tensions from the protest led to the quick release of Nyemnkem and Ogbute.
Addressing the owners of the land at Ekwu-Efume, Mrs. Nyemnkem thanked them for their prompt action in fighting for what belongs to them. She said, “We the owners of the land at Ekwu-Efume in Owa-Ekei community have deemed it fit to inform the general public of the lingering crisis over our ancestral land. First, we were at peace, patiently waiting for the Delta State government who initially had plans to develop the land to compensate us but only to be informed by one of our community Chiefs, Chief Emmanuel Melekwe, the Obazunu of Owa kingdom that in one of their chiefs’ meetings they were told that the state government had given back the lands to its owners and so, we the owners of the land should go and develop our land. We were happy over the news. Our efforts to create roads in the said land raised dust as another chief from Owa-Ekei, Chief Augustine Melekwe who knows the origin of the land claimed that we the owners of the land are no longer the rightful owners and that the land now belong to our monarch, the Obi of Owa kingdom, His Royal Majesty Obi Emmanuel Efeizomor. We never disputed his words as all the lands in Owa kingdom belongs to the Obi, but all we are asking for is for us to be fully compensated or better still allow us to have our land back and do with it, whatsoever pleases us. The matter got to its peak when Chief Augustine Melekwe ordered the police at Owa-Oyibu Police Division to arrest me and this led to the owners of the land to protest for justice. We want to let the members of the public to know that Chief Augustine Melekwe is the root of the troubles in Owa-Ekei. We are saying no to individuals who will want to use our land for their personal gains”.
Mrs. Nyemnkem pleaded that the matter should be appropriately addressed for the sake of peace, enjoining the owners of the land at Ekwu-Efume to remain calm as all will be well soon.
As at the time of going to the press, all efforts made to speak with Chief Augustine Melekwe to hear his own side of the story proved abortive.