Speaking during the inspection, Owa Monarch who is the Chairman, Delta State Council of Traditional Rulers, commended the Engineer handling the road project, Engr. Ayman and Staff of Levant Construction Company for a job well done, saying that he was impressed and satisfied with the type of work the Levant Company has done in Owa Kingdom. 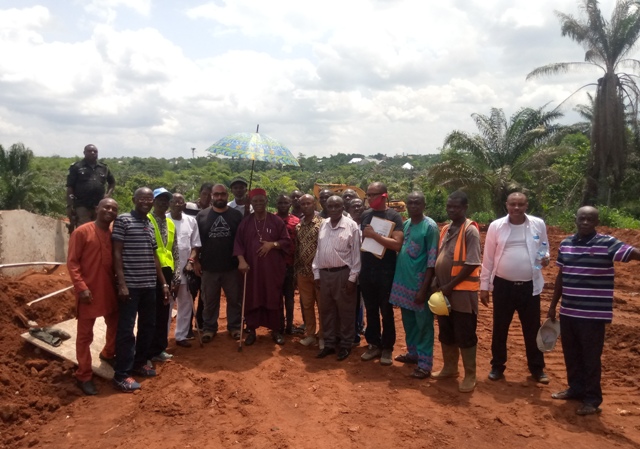 He noted that he was not surprised to see the good job done Levant is doing in his Kingdom, saying that the Company has been in the good book of the world as one of the competent, best and qualified road construction companies across the globe.

Speaking further, the Obi passionately appealed to the contractor, Engineer Ayman to help do some minor adjustments on the Road to prevent someone, whose Vehicle or Motorcycle losses control from landing into the drains. Having inspected the project, the monarch, recommended that there will be need for the Company to plant some Flowers and Grasses on both sides of the road. He concluded by thanking Chief Raphael Obianke, the Onyechukwu-kwadon of Owa Kingdom and residents of Owanta Community for their supervision and support since Levant Company commenced the work on the aforementioned Streets.

Taking the Obi round on the inspection, the, Engineer Ayman said the owners of all the buildings demolished during the grading of the road, have been adequately compensated according to the value of their properties.

“For instance, when the slope cuts across an entire building, such building will be totally demolished, but when it cut across some parts of the building, only that part will be destroyed.

One important thing about the development is that all the affected residents were adequately compensated,” he said.

In a addition, he disclosed that there will be street lights, flowers and some fanciful grasses to beautify the road when it is finally completed. He promised to put all the necessary speed brakes on the road as the Obi had initially suggested in preventing accidents.

Speaking on behalf of   the Uboh, Midomer Site Committee who are indigenes of Owanta Community, the Chairman, Site Committee, Chief Raphael Obianke, thanked the Obi and members of his entourage for coming to inspect the Road. He appreciated Engr. Ayman for following the Bill Of Quantities (BOQ).