There was a stir at the ever busy old Lagos Asaba Road following the solidarity walk embarked on by PDP youths from both local governments in support of Governor Ifeanyi Okowa and all PDP candidates. 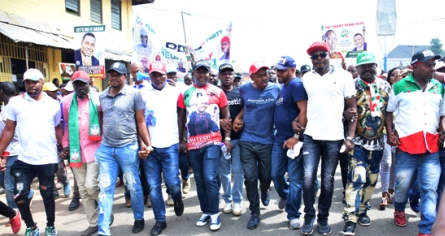 The walk led by PDP College of youth leaders, ground vehicular movement along the road for a period of time as over 5,000 youths took to the street to echo their support for PDP ahead of the 2019 general elections. READ ALSO:POLICEMEN GO BERSERK IN AGBOR, SHOOT ONE

The solidarity walk conducted as part of activities kick starting the 2019 campaign of the party in Ika land, saw the Member, representing Ika South Local Government at the State House of Assembly, Hon. Festus Okoh, join the youths to walk from Ogbemudein Mixed Secondary School down to Government Field Agbor,  where they joined other party faithful  in flagging off the Party’s journey to 2019. 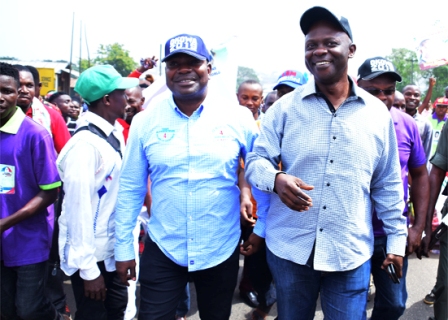 Some of the PDP youths who spoke to Ika Weekly during the march, said they came out to embark on the exercise to show their appreciation towards the developmental strides of the governor, especially on the Old Lagos Asaba road.

Some passerby who stopped to stare at the display of the teeming youths who continuously echoed PDP all the way  said they were not surprised at the number of youths who came out to walk the long distance for the governor, going by his giant strides in Ika land and beyond, because the Governor has by his good works.

0Shares
0 0
Share
Previous MY PRIESTHOOD IS IN FULFILLMENT OF MY VOW” – Rev. Fr. Ibude
Next PEACE RETURNS TO ABAVO Clan Union Pays Homage to Monarch