It’s shocking but real as a woman’s passport photograph, cowries and five hundred naira note were found in the stomach of a live chicken, on Sunday October 21st, 2018, during the Sunday Divine Service at Verge of Miracle Assembly, located at Okanigbe Street, opposite Diamond Bank, off Okwupkenye Street Agbor. 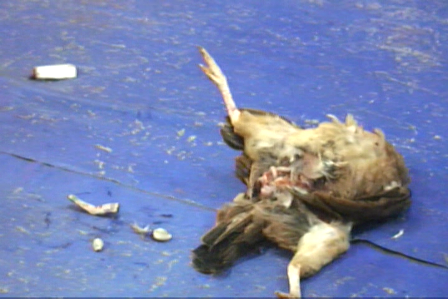 According to the General Overseer of the church, Prophet Michael Onairo (SEER 1), during an interactive session with newsmen at his office recently concerning the incidence, it all started on Sunday October 7, 2018, during the prophet’s ministration when he called out a lady by name Mercy, who had been married and in need of a baby. Continuing, the prophet disclosed that he told the lady that there was a bird (hen) in her house which the mother-in-law gave her after her wedding as a gift, which she is rearing, He further revealed that the  chicken had not laid any egg, since it was given to her over a year ago, telling her also that the mother-in-law had projected something into the chicken which is representing her baby and also using the hen to monitor her.

Speaking further, the prophet said he then asked the woman to bring the hen to the church and to also tell her husband that he was requesting for the hen, he stated that the woman asked him how would she know that there was something in the stomach of the hen and he responded that they would kill it.

Continuing, he said, he expected her the following Sunday, but she was not in the service, until last Sunday October 21, 2018, when she came to church with the hen. Seer One said he requested for a Knife and appointed some elders, women and members of the church who went to Supervised the killing of the hen at the church premises . According to Prophet Onairo, when they butchered the hen they discovered the woman passport photograph, two cowries and Five hundred Naira in the stomach of the hen continuing, he said, that the congregation were surprised with the discoveries, saying that some members used their phones to capture the scene.

He stated that the woman (Mercy), was shocked at the discovery, she fell down and started rolling herself on the floor, before the Prophet prayed for her. He also disclosed that the hen and it contents were burnt to ashes.

When asked by press men if he has heard from the woman after the incidence, he responded that the woman whom he said resides in Benin, Edo State, accompanied a friend to the church on that faithful day, during her visit to Agbor, called him on phone few days after to inform him that her mother inlaw has not been her usual self and that she no longer interact with her like before.

Prophet Seer one, said he told her to be careful and allow God to fight for her. Explaining that on the part of the mother in-law, there is a spirit behind need to fight is the evil spirit behind the acts.

Prophet Michael Onairo (Seer1) advised the masses to be careful in collecting gifts from people, admonishing that they should involve Jesus Christ in all they do and locate a church where Jesus is present to get solution, emphasizing that Jesus reveals secrets and give solution to problems. Saying that just as the case of the woman, the secrets which was revealed had solutions given to it; while maintaining that “Jesus is still in the business of changing lives”