In a bid to show that the wind of change is already blowing, a hundred of PDP members in Akumazi-Umuocha in Ika North East LGA of Delta State recently decamped to the All Progressives Congress (APC).


The exercise which was held at Akumazi-Umuocha was attended by the Chairman of APC in Ika North East LGA, Mr. Sunny Onyejose and other leaders of the party. 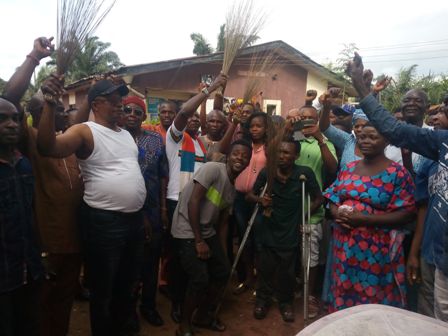 Speaking during the decamping exercise, Mr. Lucky Okitia who led the defectors said that they left PDP to APC because they were tired of being used; adding that the youths of the community were not recognized by PDP.
In his words, “the youths of this town are not recognized. After using us, they will dump us. They impose a candidate on us without consulting the youths to find out if the person they are bringing out is the choice of the people. This group (MY PEOPLE) who decamped from PDP to APC sprang up from a group of agitators whose former leader was Lucky Nduka (aka Onwankwu). He led the group to fight for justice. We are tired of being sidelined. They made us to know that youths are the leaders of tomorrow. We are tired of being enslaved and imposing of candidate on us.”
Speaking further, Mr. Lucky hinted that they were out to fight for their right, noting that the only way to actualize it, was to join APC which he said would lead them to the promise land. He noted that with the maximum support of the APC leaders, they were out and ready to dislodge PDP in the forthcoming elections.
Receiving those decamping, the APC Chairman in Ika North East L.G.A, Mr. Sunny Onyejose thanked the defectors for their wise decision, assuring them that the party would not disappoint them. He urged them to remain loyal as their interest would always be protected, adding that as a united family and God being on their side, they would achieve greater goals.
According to him, “We are ready to defeat PDP in this Ward 11 in the forthcoming local government election. We will let them know what democracy and administration entails. That is the mission,” he concluded. Mr. Onyejose urged all members of the party to remain law abiding and continue to work with one mind.
In the same vein, Chief Captain Gabriel Morka (rtd), a political leader in the party (APC), expressed his happiness towards the large number of the decamped members, urged them to remain loyal and hardworking. He added that the party does not encourage laziness. He prayed God to bless the party leaders, and all his loyal members.