WE WILL BRIDGE THE INFORMATION GAP – The Bridge Builders

The Bridge Builders, a group made up of stakeholders from all political wards in Ika South Local Government Area has stated that their sole aim is to bridge the information gap between the State government and the masses, to enable people be properly informed of the achievements of Governor Ifeanyi Okowa so far, and also canvass for a 2nd term for the governor. They made this assertion in their meeting which was held on the 14th of August 2017, at the house of the convener of the group, Mr. Peter Idion, S.A to the governor on Community Relations. According to them, the group is necessitated by the gross misinformation of the people on what Okowa has been doing and still doing in Ika land, and across all other local governments in the state, and the numerous attacks and blackmail on the government, especially in the area of local government salaries which is not the jurisdiction of the State government. They stated that the group is not a parallel party or affiliation, but rather, they will work in together with the P.D.P Chairmen in all levels to actualize their goal, which is to see Okowa return for a 2nd term on office, come 2019.
Speaking with an Ika Weekly Newspaper reporter, the chairman of the group, Hon Chucks Emuebie noted that the group is not a group in contest with other groups, neither is it a parallel organ of P.D.P. He said it is solely for canvassing for the 2nd tenure of the governor, as they are all stakeholders of Governor Okowa’s 2nd term in office. In his words, “we have to support the governor, because we have discovered that there are a lot of communication gap between the governor and the governed, and the governor is doing a lot of work which most people are not aware of, that is why there are a lot of people criticizing him out of ignorance. So it is our duty to carry the message to different communities, different individuals, making sure they are properly informed. Our governor has done so well, and we are going to complement the efforts of all the aide in making sure all what the governor has done and is still doing is known to the people”.
He further stated that their assignment will be backed up by prayer and fasting for the governor, because whatever is in the hands of God is safe and secured, we shall also ask for His hand of protection to rest upon the governor, and guide him so that the wisdom he has been endowed with will carry him to a successful end of his first tenure, and also lead him to a 2nd term.
Also speaking, the interim deputy Chairman of the group, S.A to the governor on Labour matters, Comrade Jonathan Ojobu, said the group which is about Governor Okowa, is made up of people of like minds, and was formed to further assist the governor to further disseminate the of information of his policies and programs to the people. According to him, “a lot of persons are not aware of the good things he has been doing, so we decided to come together to properly propagate his good works. A lot of roads have been tarred by the State government in Ika South, but people are not aware, and they keep portraying the governor in a very bad light, and we are not happy about it, hence our coming together, to go to the grass roots, mobilize them, tell them the achievements and challenges of his Excellency, and how to overcome such challenges. What we have embarked on is a sort of enlightenment campaign”. Going further, he noted that the group is out to let people know that the governor is not as bad as he is being portrayed out of malice, stating that His Excellency has good intentions for the State and Ika residents, adding that his blue prints across all local governments in the state speak volume.
The convener of the group, Mr. Peter Idion reiterating the fact that the group is not a parallel group in the P.D.P stated that the group will work with instructions from Hon. Collins Bello, Ika South Local government Chairman, Hon. Moses Iduh, Delta North Senatorial District Chairman, and Barr. Kingsley Esiso, State Chairman. He further stated that the numerous hate campaign against the governor, some of which were done out of ignorance while others are out of malice, informed their decision to form such a group, to embark on house to house, market to market, door to door campaign to inform the people of the good works of the governor, and also canvass for the 2nd tenure for the governor.
Other collective leaders of the group who were in attendance are; Hon. Fada Ibude, S.A to the governor on Security matters, Mr. Tony Alika, Hon Chris Ogala, Mr. Charles Ekpenisi, Lady Bridget Ugbegbor, Friday Orubor, Chief Iyawa and others.
Speaking further, Mr. Idion stated that it is a fallacy to say that the governor does not like Agbor people or people from Ika South, saying that the governor has many friends from Agbor, and is close to Jim Ovia, Godwin Emefiele, Ebenezer Onyagwu, all top Agbor indigenes. Hence he urged the few disgruntled persons using the gimmick and the hate speeches that is making Agbor lag behind to desist from doing so, as they are on their way to the promise land with the Okowa S.M.A.R.T Agenda. He called on all who has the governor at heart to join them in propagating the message. 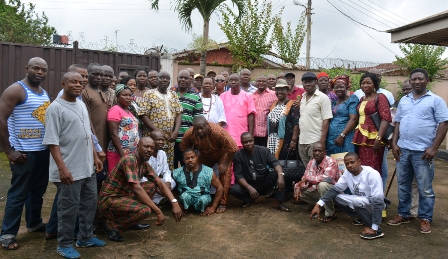