The Metropolitan and Primate of the Church of Nigeria – Anglican Communion, Most Revd. Nicholas D. Okoh, in the company of over 50 Anglican Bishops on Monday, January 6, 2020 stormed Ika land for the commissioning and Dedication of Ika Diocesan Hospital at St. James Anglican Church premises, Agbor, Ika Queen’s Administrative Block  and Ika Queens Hostel blocks sited at Ika Grammar School.

The projects commissioned amongst other ongoing projects in the Diocese, are being championed by the Bishop of Ika Diocese, the Rt. Revd. Godfrey I. Ekpenisi, to alleviate the financial standard of the Diocese and make it a self-reliant Diocese.

The Primate and his entourage alongside the House of Bishops were received by the Clergies, the Laity, the Diocesan Chancellor and Legal, the Boys and Girls Brigade, and a cultural display by the women of St. James Anglican Church, Agbor. 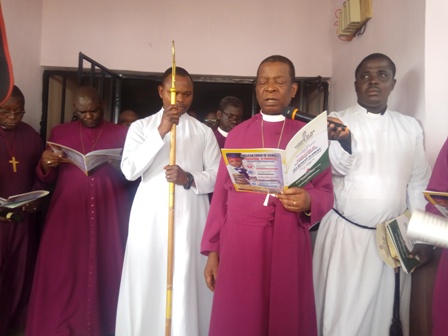 In his speech, he lauded the efforts of Rt. Revd. Godfrey Ifeanyichukwu Ekpensi, the Bishop of Ika Diocese who initiated the idea of the hospital and laid the foundation on the 22nd of April, 2019 and made sure it was completed and fully equipped.

In his speech, the Bishop, Rt. Rev. Godfrey I. Ekpenisi attributed the ideas of initiating such projects, especially the Diocesan Hospital to God.

Bishop Ekpenisi noted that he became the Bishop of the Diocese in December, 2018, meeting a Diocesan Hospital known as St. Luke Hospital on ground which according to him was temporally not functioning.

According to him, he saw the need for the establishment of a Hospital that would cater for all within the Diocese and beyond, saying that he conceptualized the vision of establishing a standard and fully built Hospital which was approved by the Diocesan Board on the 18th of December, 2018.

Continuing, he said that for his vision to be actualized, a Medical Advisory Committee, headed by Sir. S.C.E Omumu was set up. They suggested that St. James compound should be used. With the fund raising for the commencement of the project which was held during his consecration and enthronement thanksgiving followed by various donations from well meaning Anglican faithful, the project kicked off.

On the 22nd of April, 2019, the foundation of the hospital was laid and the site of the project according to him was handed over to Messers Chuks Nwobi and Emmanuel who according to him performed perfectly well without charge to the Diocese.

Commissioning the Projects, the Primate, Most Revd. Nicholas Okoh commended the pragmatic bishop, Rt. Revd. Ekpenisi for his strong vision and foresight of building a self-reliant Diocese, describing it as a rare feat considering his assumption of office as the Bishop of the Diocese.

He appealed that the Bishop be given full support and encouragement in any way necessary to carry on his vision of building a strong Diocese.

In a separate remark, the Primate condoled with the Ven. Justin Olomu over the demise of his wife, saying that he was aware that late Mrs. Jane Olomu was ill and was said to have been flown to India for medical treatment, but only to later hear that she was dead.

He charged the Diocese to remember him in prayers, saying that anyone hit with such a tragic incident is bound to become susceptible to different trials, thoughts and challenges and can only overcome them through prayers.