The founder of Queen Grace Foundation UK and the Obi Ikenchukwu Foundation, Princess Genevieve N. Ikenchukwu of Agbor kingdom on Friday 13th December, 2019 distributed customized school bags to the pupils of Hedson Schools, and to the students of Baptist Girls High School, both in Agbor, Delta State.

Teachers of the benefiting schools were also given customized bags, T- Shirts, cups and other items. Each of the beneficiaries got a bag, pencils, color pencils, hair beads, other items and they also received lunch from her as they all had their Christmas carols on that day respectively.

Addressing the students, Princess Genevieve said the essence of her visitation was to donate Queen Grace Foundation bags and to also  talk about the Girl-Child education as her parents died in the year 1977 and 1979 respectively leaving her and her three siblings orphans (all girls) while they were kids.

According to her, a research she conducted about Girl-Child education showed that almost one hundred million girls are out of school. Based on that, through Queen Grace Foundation UK and the Obi Ikenchukwu Foundation, she has taken up the task of encouraging students, most especially the girls to take their studies seriously, always be courageous, excellent and have confidence in themselves.

Speaking further, she said whether an ‘A’ or on average student, the girls should be dedicated to their studies saying that no society or culture should determine the limit of the education of girls. Princess Genevieve noted that education is a key to success, confidence, sophistication and determination and urged them to hold firm to education and choose a female mentor or role model whom they should look up to and emulate. And such role model should be passionate about the plight of the Girl-Child as she; Princess Genevieve.

The Founder, OIF then went on to appreciate the teachers for nurturing the lives and future of the students even as a difficult task and enjoined them to keep it up. She on behalf of her late parents, His Royal Highness Obi Ikenchukwu and her Royal Highness Queen Grace who according to her was a student of Baptist Girls High School Agbor as well as members of the Foundation appreciated all the teachers. 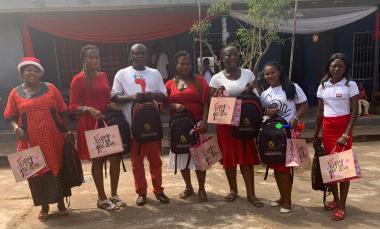 Miss Onwochei Andrella, a student of Junior Secondary School (JSS3) on behalf of the school management and entire students appreciated the Princess for her wonderful words of encouragement and for her kind gesture, praying to God to bless and reward her generosity.

Speaking in an interview, the Principal of Baptist Girls High School, Mrs. Samkennedy Stella, said Princess Genevieve is God’s sent adding that the Princess had told her she had some gifts for the students but she was expecting biscuits and sweet and not something that big. She disclosed that since she assumed the position of the Principal of the school, nobody has ever come to give gifts to the students while maintaining that people only come and donate to the school. The Principal noted that the Princess has an orphan on scholarship in the school and is looking for more to sponsor.

Mrs. Samkennedy noted that the children are very happy over the gift they received. She said if the country has more people like the Princess, then Nigeria would be a better place, saying that some orphans became criminals because people never show them love. 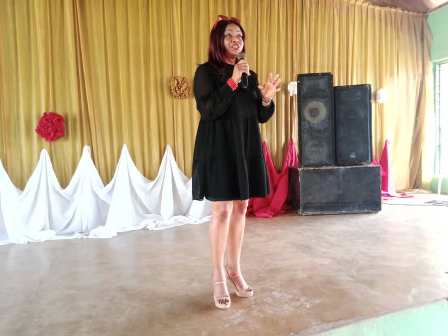 In addition, she said the generosity of the Princess will be remembered by the students and that the school would be looking toward more admission as all parents and students were very happy with the kind gesture of the Princess. She prayed God to bless and reward her efforts.

Also, speaking to Ika Weekly reporter in an interview, Princess Genevieve noted that she and her siblings were raised by her Aunt, her father’s sister and that it was her father’s desire that they should be properly educated and they were enrolled in the best schools. She disclosed that after secondary school, they left for the University and were sponsoring themselves, saying that two years in the university, they got a scholarship. She said her further qualifications as a lawyer was earned in London.

The Agbor Princess pointed out that the idea of the two Foundations is to honour the Monarch and his Queen, as well as a form of connection between her and them, as she has always wanted to create that parent-child relationship that she actually never had with her parents. She noted that she had, had this idea in her for a long time but the problem was how to actualize it and expressing it physically. She however affirmed that she is always satisfied each time she does something for the Foundations. She noted that her late parents acknowledged the need of protecting them as girls, as such the only way of keeping their memories alive is through the activities of the Foundations.

Princess Genevieve further disclosed that some relatives and well wishers from Agbor kingdom particularly her friends, mostly Yorubas in Lagos and London have been supportive and contributing immensely to the success story of the Foundations. The greatest thanks, she gave to God, who has considered worthy enough to be used as an instrument of blessing and service to others.

Importantly, she expressed her satisfaction and sense of fulfillment in her ability to impact the lives of orphans and most especially the Girl-Child.

The OIF Founder urged parents to educate their female children as the educating of the Girl-Child heralds socio-economic development to any society, stressing that the benefits of educating the female child to the any society cannot be over emphasized. She then suggested that parents who do not encourage the Girl-Child education should be enlightened.

Princess Genevieve ended by pointing out that, as according to her late father Obi Ikenchukwu, any society or              tradition that is against girl child education should have such customs modified while on her part she prefers                such customs abolished.