Mr. Ashien stated this on Wednesday 28th, October, during the courtesy visit of the Queemozz Model in the company of her entourage, saying that showcasing of the  Western culture should be minimal, emphasizing that the culture of a people properly defines who they are. 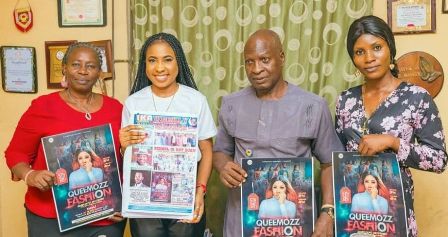 He said the knowledge of people’s culture brings about their unity, cooperation, and appreciation of their values. He said, “Western culture is a positive factor but it is important also that we don’t allow Western influence to overshadow ours making us forget our own very highly valued culture as Deltans and Nigerians in general.” He appreciated the Queemozz Model for a job well done thus far and for the honour of visiting Ika Weekly Newspaper office.

The Model while appreciating the CEO of Ika Weekly Newspaper for his fatherly love, support, and contributions towards the growth of the Agency thus far, noted that she was on a visitatiotn tour of appreciation to all her sponsors.

Queemozz said arrangements for the Fashion Expo for the year 2021 are intact, appealing for more sponsorship and support as the event draws near. She disclosed that she is indebted to all her sponsors, saying that her wish is to go beyond the shores of Nigeria projecting the cultural heritage of her people.

According to the Queemozz boss, “Our third Annual Fashion Expo is set to be hold on 5th December 2021 at Shalom Event Centre, Agbor Delta State; your support means a lot to me”, she said.