It was a joyous and memorable day for the sixteen patients of the Uweifo Orthopaedic Nursing Home, Ewuru, Agbor, who benefited from the food items donated to them by Prophet Joseph Igbodo, to put smiles on their faces for the Christmas and New year celebrations.

The General Overseer, Divine Faith Evangelical Mission International, Proprietor Job Orphanages Home and St. Stephen Trust Widows Home, all in Agbor, Ika South Local Government Area of Delta State, Prophet Joseph Igbodo, in company of some of his pastors visited the Orthopaedic Nursing Home to make them have a sense of belonging in having what they would use in celebrating during the yuletide season.

While at the Home, Prophet Igbodo visited the patients individually in their different wards before giving them the food items that he brought for them.

Addressing the workers and patients of the home, Prophet Igbodo, informed them that he came to visit them, to encourage them and put smiles on their faces as they celebrate the birth of our Lord Jesus Christ and the New Year. He urged the patients to put their trust in God, praying that they all would be healed of their injuries in no distant time, in the Mighty Name of Jesus. Continuing, he encouraged the workers of the hospital to always put in their best, for there is always a reward, saying that the people are very proud of the workers of the hospital. 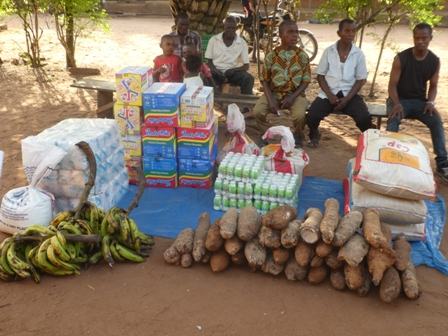 Prophet Igbodo on behalf of the pastors and entire members of Divine Faith Evangelical Mission International, Job Orphanage Home and St. Stephen Trust Widows Home; presented to the patients, some food items and toiletries which include; 4 bags of rice, 11 cartons of indomie noodles, 5 cartons of Bobo fruit juice, 3 rolls of tissue paper, some tubers of yam, 3 bunches of plantain, clothing materials and beverages. 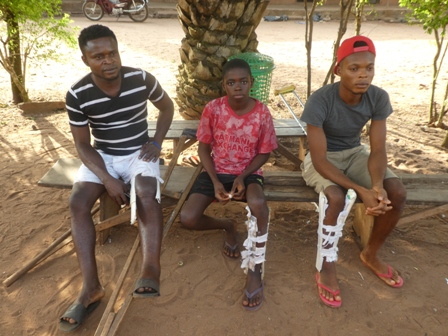 Responding on behalf of the management of the Orthopaedic Home, Mr. Egwuabor Emmanuel, the Secretary of the home, thanked and appreciated Prophet Joseph Igbodo for his act of benevolence and show of love and prayed God to grant him good health, more grace and long life to continually impact his humanitarian services to the needy in the society. He used the opportunity to appeal for government assistance in renovating, equipping and supplying beddings to the nursing home.

In the same vein, Mr. Nicholas Mgbeken, the Assistant Secretary of the home, thanked the state governor, His Excellency Senator Dr. Ifeanyi Okowa, for providing the home with solar powered water borehole, he also thanked Prophet Joseph Igbodo, for all that he has been doing for the community and prayed God to bless him and his family abundantly.

In their separate remarks some of the patients who spoke with Ika Weekly Newspaper reporter, namely; Gloria Ikenna, who was brought from Lagos nine months ago due to the auto accident she had two years ago, as they were unable to fix the broken bones injuries she sustained on her two hands and legs for over one year and three month before she was brought to the Orthopaedic home. She thanked the management of the home for the speedy response to treatment, saying that they were able to fix the bones and that there has been great improvement since they brought her to the place.

On the visit of Prophet Igbodo to the home, she prayed God to bless him and grant him all his desires; she described the prophet of God as a loving and caring father.

In the same vein, Mrs. Cynthia Ibeye, whose daughter Treasure Chukudi Ibeye, a three years old child was admitted in the hospital due to bike accident on her way from school in November 2018, said that the baby is responding positively to treatment, she praise the efforts of the workers at the home for thir selfless services.

Speaking on the visit of Prophet Igbodo, she prayed God to bless and reward him exceedingly for his good workers.

Another patient, Mrs. Ngozi Bose Bibie, a police officer at the Abavo Division of the Nigeria Police Force, who was brought to the home after a motorcycle accident which she had on 11th November 2018, along Abavo road, while coming back from work thanked God for the great improvement on her leg, saying that the workers of the home are really trying and she is happy with them.

On the visit of Prophet Igbodo, she said that the Prophet, has been a very good man of God, who delights in helping the needy in the society, describing him as a man of God who does not eat alone.

She enjoined other men of God to emulate him, saying that since she came to the Orthopaedic home, she has never seen anybody bringing food items to the patients. She prayed God to keep the Prophet in good health and grant him the enablement to follow Him (God) to the end.