The Delta State Commissioner of Police, CP Mohammed Mustafa has called on officers of the Nigerian Police Force, Agbor Area Command to protect themselves first in the discharge of their duty before protecting others. 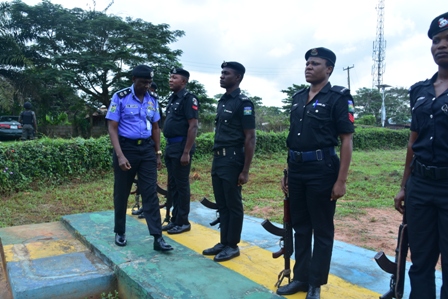 He made the call during a visit to Agbor Area Command on Thursday 15th November, 2018 for an interactive session with the officers following incessant attacks on Police Officers by miscreants.

The visit by the Commissioner which is his 2nd visit to the Agbor/Ogwashi-Uku Command is aimed at charting a course forward on the prevention of loss of Police officers who are gunned down on duty.

Interacting with the officers comprising the Commanders Agbor and Ogwashi-uku Area Commands, Chinelo Ikejiani,  and ACP Fidelis Osadume, DPO’S from all divisions, Inspectors, rank and file sergeants, the CP said it is expedient for the officers to protect themselves first before protecting others, saying that there is only one life.

Recounting several cases where Police men have been attacked and killed by criminals, he stated that it is shameful for trained police Officers with rifles to be outwitted by untrained criminals with machetes and other weapons. He therefore charged them to devise proper safety measures for themselves, especially at check points.

He opined that many officers have died due to their nonchalance and negligence for safety measures, charging them to wake up from their slumbers. He reasoned that with the years of training given to the Officers, they should be conversant with their rifles. He questioned the courage and bravery of the officers, revealing that some have died as easy target of criminals, while others have died without putting up a fight. He noted that even if they must die, they should die fighting, calling on them to activate the crime fighting spirit in them.

Admonishing further, he urged them to guard themselves religiously, read books to build themselves up, and do away with phones and social media platforms which he said are time wasters that can make officers on duty lose focus and concentration. He charged the officers to be well behaved and disciplined, stressing that the Force will not close its eyes to undisciplined officers when they are caught.

Speaking on the coming elections, he called for comportment of the officers, urging them not to be used as puppets in the hands of politicians. He emphasized that the officers are not expected to pay their loyalty to politicians at the detriment of the Police Force, urging them to seek clarity from the hierarchy when in doubt on how to conduct themselves.

Speaking on the case of kidnapping which he said is now prevalent in Agbor, he urged officers of the Division to put an end to the menace, revealing that Delta State has over 6 thousand Police officers who concentrate on protection of individuals. He encouraged the men to be proactive so as to get answers to their prayers, stressing that but  for prayers, Delta state would be in a terrible state.

The officers, who appreciated the charge given them by the CP, bared their minds on challenges confronting them, pledging to live up to their expectations by justifying their pay.