The Cathedral Church of Ascension was awash with jubilation on Saturday 15th December 2018 as the Governor of Delta State and his wife, Sen. Dr. Ifeanyi Okowa and Dame Edith Okowa, joined by other worshipers gathered to witness the enthronement of Bishop Godfrey Ekpenisi as the new Bishop of Diocese of Ika, Church of Nigeria Anglican Communion.

The enthronement service which was presided by a valedictory and retirement send off on the 14th of December was presided over by the Archbishop of Bendel Province, The Most Revd Friday John Imaekhai, PhD. 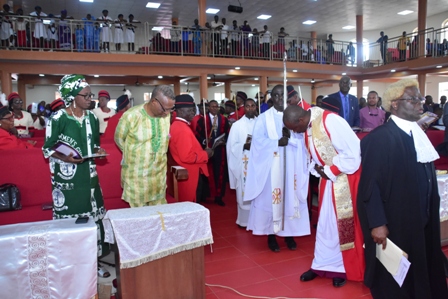 Preaching his first sermon as the Bishop of the Diocese, Bishop Ekpenisi stated that his enthronement has ushered him into a 3 fold ministry of Care, Compassion and Communion (3Cs), Moulding, Making and Modelling (3Ms), Preaching, Prayer and Praise (3Ps).

The Bishop enjoined Ika people to be caring towards one another, saying that care and concern over one another should be at the forefront   in their heart. He said love should be evident in them, enjoining them to do away with enmity to enable them make progress collectively. He sued for a Diocese where there is equity amongst all, charging members to help each other in time of need. 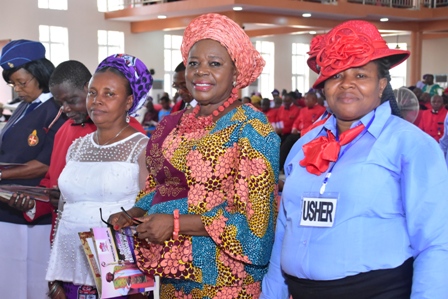 He charged the Diocese to promote Ika language, disclosing that the church will not fold her hands and watch Ika language go into extinction. He posited that most present crop of children is deficient in communicating in the language. Lamenting the gradual extinction of cultures and traditions of Ika kingdom, he asserted that the farming practice Ika is known for is gradually eroding, calling for measures to prevent it from going into extinction.READ ALSO:WAY FORWARD FOR IKA FEDERAL CONSTITUENCY &#8211; Ehikwe

Addressing the rampant case of migration of the youths to unknown destinations in search of wealth,Bishop Ekpenisi   urged the church to be prayerfully prepared for the return of such youths. He expressed fears of losing the present generation to the societal change. He stressed that the church cannot be separated from the culture of Ika land, saying that it is sacrosanct to preserve the culture of the land.  He maintained that the church has a role to play in preserving the culture.

Calling for collective efforts in reviving Ika grammar school to a reputable standard, Bishop Ekpenisi opined that education should mould people to meet the demands of the present generation. He emphasized that the church will bridge the gap between this present generation and the ones to come.  Going further, he stated that Ika land is blessed with two governors in the persons of Sen. Ifeanyi Okowa, Mr. Godwin Emefiele, and Most Revd. Nicholas D. Okoh; the Metropolitan Primate of the Church of Nigeria – Anglican Communion who also doubles as the Chairman of Global African Future Conference (GAFCON) worldwide and other distinguished sons and daughters of the land.

Speaking on the 3Ps He stated that pastors should preach sermons that are life changing and filled with moral values, admonishing them to improve on themselves. Amongst other plans, he disclosed that purposeful teaching, seminars, retreat, workshop, interaction with traditional rulers, interaction with the youths and interaction with the political class can help chart a way forward to bring about a better church.