AM HEARTBROKEN, SICK ON DEMISE OF CHUKWUMA – Akumazi Monarch

Supporters of Sebastine Okoh, the All Progressives Congress (APC) candidate for House of Representative, Ika Federal Constituency, poured out in their large numbers on Wednesday 28  and Thursday 29, November,  2018 to canvass for more support for their candidates in a rally round the villages in Ika South and Ika North East,  as he kick-starts his campaign.

The first phase of the rally which was on Wednesday 28th, saw the crowd go round Ika South. Starting from Sebastine Okoh’s Secretariat at Old Lagos/Asaba Road to Agbor Obi, Alishimie,Oza Nogogo, Ewuru, Abavo, Owa Alizormor, Owa-Alero and back to the Secretariat. 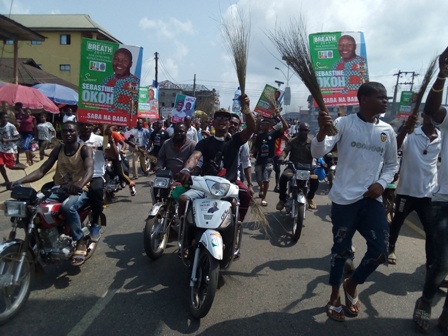 The mammoth crowd which drew the attention of onlookers and passersby sang to the praise of Sebastine and called out to the people to join them in voting him in come 2019.

The Coordinator of ward 11 Umunede, Mr. Abel M. in an interview, assured Sebastine of  100% support.

“We have above 19 thousand registered voters, all of whom are for Sebastine Okoh. We like his person. He is a philanthropist and kind to a fault, those he has helped cannot be numbered. We believe he is going to win the election because he is the people’s mandate”.

Mr Ikechukwu Bello who stated that Sebastine Okoh has handed over all that concern the election to God, also showed optimism of his principal wining the election, because of qualities and ideology. “Sebastine believe in the oneness of Ika people, which is paramount for peace and progress to thrive.  Also, he is someone of a soft heart who makes people trouble his. We are therefore coming out en masse from both local governments; Ika North East and South to give him our support.  Even when those from the opposition party are trying to lobby and buy their way through, I know Ika people will vote their conscience on that day. This rally therefore goes alongside orientation; educating the people to stick to the right choice, because their future and the future of their children both depend on their voters”.

In his own remark, the Chairman of Sebastine Okoh Campaign Organization, Dr. U.C. Anyaiwe said, “We will all support Sebastine with all our mind because Ika people need him to deliver us from political bondage.” He went further to state that it was a peaceful and warned the crowd to avoid violence in any form.

Hon. Elder Oris, Publicity Secretary of the campaign team then revealed, “I saw a revelation of him winning the election.”

‘For a nation to move forward both politically and socio-economically, the leaders must demonstrate esteem …