Determined to ensure that all eligible voters in Ika land who have not registered with the Independent National Electoral Commission (INEC) in the on-going voter’s registration exercise do so and collect their Permanent Voter’s Card (PVC), a support group in Ika Federal Constituency under the auspices of Sebastine Ambassadors embarked on an aggressive awareness/sensitization rally across Ika Land. 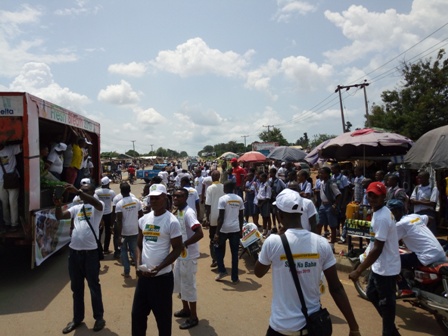 The team which comprises professionals from various fields and promoters of peace and good governance, particularly in Ika land, began the three days rally with their branded cars and T-shirts conveying the message “GO GET YOUR VOTER’S CARD” on Thursday, March 22, 2018. The rally which also appeared as a form of carnival was full of excitement and generated traffic gridlock along the major roads in the areas. 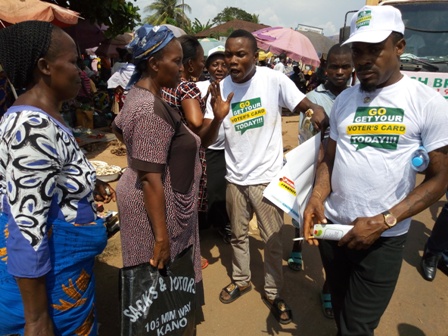 It was led by the coordinator, Mr. Ambrose Chiemeke, who during an interview with the press explained the reason for the rally. He said the exercise became imperative considering the poor number of voters having their Permanent Voter’s Card (PVCs), which he said was the first determinant of the political power of the people ahead of the 2019 general elections. He also said the people no longer see it necessary for them to get their voters card because they feel that the leaders have failed them, hence the reason for the rally to sensitize these set of people and make them understand that as they clamour for something new, they cannot make that happen until they get their voters’ cards and effect the necessary change at the poll.

His words, “at this juncture, it has become imperative for Ika people to rise up to the challenge irrespective of their political affiliations. It is a time to unite by arming ourselves with the greatest political weapon, which is the voter’s card. This rally will cut across every nook and cranny of Ika land as our team, Sebastine Ambassador will not leave any community untouched.”

Speaking further, Mr. Chiemeke posited that the man Sebastine Okoh whom they are projecting for the House of Representative election in Ika Federal Constituency is a liberal man who they are optimistic will give the people effective representation if elected. He said the group rally was not of a selfish interest but a selfless effort to lead the people to make the right choice. He added that even though the electorate chooses to vote Sebastine Okoh or other candidates, they still need the voter’s card to do so. “So, we the Sebastine Ambassadors are throwing it open to everybody to please get their voter’s card in order to move Ika land forward.” He also appealed to the people not to sell their voter’s card at any cost in order not to enslave the generation of their children.

Also speaking, Mr. Solomon Onyeagwu, a member of the , posited that with the PVC, the people can collectively make a greater change in Ika land and Nigeria at large by voting purposeful leaders into power. He advised all and sundry not to sit back at their comfort zones, but to show due diligence and commitment to this project as a stitch in time saves nine.