The youth wing of Sebastine Okoh campaign group has stated that the election of the principal come 2019 general elections is a walk-over, enjoining all youths of Ika nation to queue behind Sebastine who they said will make them proud as member representing Ika nation in the Federal House of Representatives, Abuja. 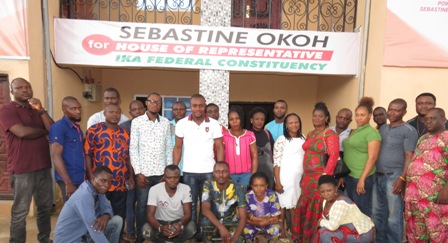 The group speaking through its chairman, Desmond Kimekwu during a meeting, described Sebastine Okoh as God sent, saying that his kind of person is rarer to find. He remarked that Sebastine’s humility made him a household name in Ika, calling on the people to continue to give him their support and that when he finally emerged will do more for the people.

According to him, “the Sebastine I know will he never forget his people on his emergence as the member representing Ika Federal Constituency at the Green Chamber. Without occupying any political position, Sebastine has done a lot and he is prepared and ever ready to do more. I assure everyone that Ika people will wear smiling faces having Sebastine at the Green Chamber. So therefore, let us all rally round Sebastine to bring his dream of becoming the next member to represent Ika people at Federal House of Reps come through”.