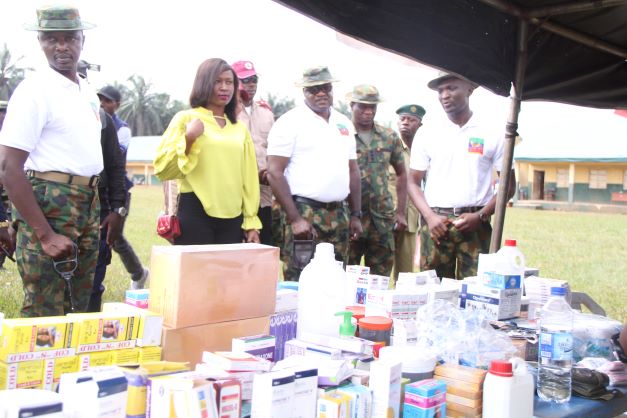 Speaking in his address, Lt. Col. Abubakar stated that the free medical outreach was part of activities outlined to mark the 2022 Exercise Still Water II. The exercise according to him was one of the measures put in place by the Chief of Army Staff, Lt. General Faruk Yahaya aimed at beefing up security, surveillance and combating criminal activities, especially during the yuletide period when criminality gets to its peak within the South-South region of the country.

Continuing, the army commanding officer said the exercise will further strengthen the already existing cordial civil-military relationship between the Nigerian Army and the host community.

“We want to use this opportunity to give back to our host community, most importantly to let them know that the Nigeria Army is a caring and loving organization under the strategic leadership of our Chief of Army of staff.

“Our special thanks go to our Commander, 63 Brigade, Brigadier General David Saraso for his untiring strategic guidance and mentorship. I also want to reassure the general public that the 181 Amphibious Battalion will continue to remain committed and resolute in her collective efforts to uphold the mandate of achieving the vision of the Chief of Army staff.

“We will continue to work in a joint environment with other security agencies to sustain the operational tempo and improve on the general security situation within our area of responsibilities”.

While thanking all for coming, Lt. Col. Abubakar enjoined all present to make good use of the free medical exercise to get treated, reminding the people that health is wealth.

Briefly responding, Captain Peter Ojobo who led the medical personnel stated that being an agrarian community, that arthritis, diabetes, and High Blood Pressure are common ailments with the people that they have advised the residents to take their medication very seriously.

In appreciation, the Alihagwu community leader, Elder Francis Adahor alongside one of their illustrious sons, the Chief Executive Officer of 1 & Isioma Nigeria Limited, who equally doubles as an S.A to the Delta State Governor on Community Development, Mr. Isioma Isoko appreciated the Commanding Officer of 181 Amphibious Battalion, Lt. Colonel Abubakar for choosing their community to host the medical outreach, an act according to them has brought accessible health care to their doorstep and prayed the good Lord to bless them.

High point of the ceremony was the flag-off of the free medical outreach by Commander 63 Brigade, Asaba; Brigadier General David Saraso. The programme came to an end with a visit to Job’s Orphanage Home , Agbor.