The atmosphere was charged as Ika United beat Abavo United by a lone goal in a friendly match geared at preparing the young talents towards the Delta State League Football Season which will commence soon.The match which was played at the home ground of Ika United at College of Education Agbor on Wednesday 9th August 2017 and saw Ika United emerge victorious in a hard fought win over the away side, Abavo United. Both teams had the opportunities to add to the goal tally, but failed to take their chances, as the final touch kept eluding them in front of goal post . The lone goal was scored by the captain of the side, Ali, in the 65th minute with a well timed pass from the midfield into the 18yard box of the away team, after playing out a goalless first half. After the game, the coach of Ika United, Coach IBB, expressed satisfaction at the match fitness of the players who have been on break, hailing their performance as satisfactory, even in the face of a hard fought victory. 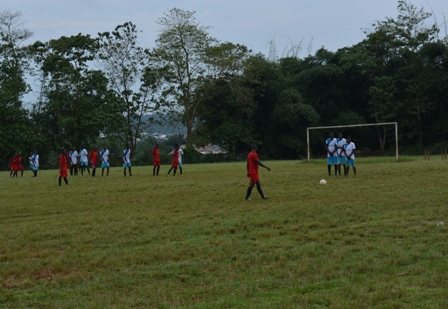 Ika United, a football team made up of Ika and non Ika residents ranging from 14 to 18 years are barely a year old, but has groomed a lot of young talents who have caught the attention of other top football clubs outside Ika Land, according to the coach of the side. The team manager, Comrade Buzugbe Friday who was present to cheer the team to victory expressed optimism at the form of the young lads, calling for more hands to be on deck through partnership, in order to take more talented Ika youths off the streets through football.
The coach Of Abavo United, Pastor Timothy Ujam said that even in defeat, his players played a good game, even though they had hoped to win the fixture, having defeated them in the first leg which was played in their home ground, Abavo previously. He said the team has groomed over 27 Ika youths who are all now plying their trades abroad, hence the need to groom younger sets of players.
Coach Ujam called for more sponsorship and partnership of Ika football by the government and private individuals, to harness more Ika talents who are yet to be discovered, and take them off the streets by engaging them in active football. He disclosed that Abavo United Football Club have played various high profile tournaments, including representing Anioma region in the Delta State Ethnic Football Tournament, which they won, and a host of other tournaments.

0Shares
0 0
Share
Previous FOOD FOR THOUGHT- BE YOURSELF
Next HON.VICTOR NWOKOLO SETS BENCHMARK IN EFFECTIVE REPRESENTATION