The Honourable Commissioner of Basic and Secondary Education, Hon. Chinedu Ebie had on the flag-off of the Advocacy for the Teaching of Indigenous Languages in Selected Pilot Schools in Delta State, said that it a wrong thing to do, teaching students who will end up not comprehending what is taught. This he said is a result of using alien languages like English and French to teach our Nigerian children who struggle to make meaning out of these languages before understanding the message. 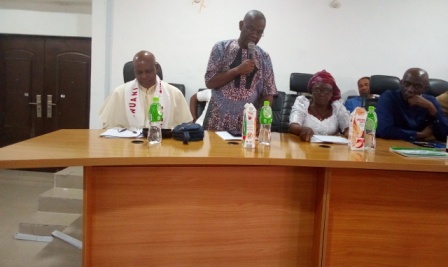 The advocacy programme which was held at Olorogun Felix Ibru Conference Hall, Asaba on Tuesday 9, April 2019 had the presence of the representatives of Ika, Isoko, Izon, Urhobo, Ukwani, Enuani and Itsekiri.

In his keynote address, Hon. Chinedu Ebie among other things, said, “teaching without total comprehension is wrong, hence the 6th edition (2014) of the Federal Government National Policy on Education (at pages 8-16) proposes the usage of our mother tongue or language of immediate environment as the language of instruction. It is also well known that a strong mother tongue foundation equips children with skills they need to learn additional languages, allowing them to transfer their understanding of the structure to several new languages.”

Also speaking at the event, Mrs. Christie Akako commended Hon. Ebie for the promotion of the teaching and learning of indigenous languages. Her words, “I commend the Honourable Commissioner for Education for his giant strides towards the promotion of the teaching and learning of indigenous languages.” She went on to say, “the population of our country was recently estimated at 198 million inhabitants. Although Nigeria has three major tribes-Hausa in the North, Ibo in the East and Yoruba in the West, the country has over 250 ethnic groups and by implication about 250 languages as well. Leaders of thought have made efforts to see that indigenous Nigerian languages are taught in our schools. One educational psychologist once said that a child understands better what is taught in mother tongue than the school language. This is because at birth the mind of a child is totally empty and whatever value he is taught, whether formally or informally will register automatically in his mind, such a thing becomes indelible,” she said.

According to Mr. MC Bioseh, the Director of Education Resource Centre, “a biblical allusion to the Tower of Babel brings to the fore the importance of language in growth and development of a people. The builders of that skyscraper had their ambition crushed when their language was confused. There is therefore compelling need to urgently promote the teaching of indigenous languages in our schools. As a group or community that is mutually intelligible in communication, we become more united and organized. Presently, our languages are dying or completely dead since many of us can no longer communicate effectively in our mother tongue.”

It was an interesting event which ended with charge to revamp the lost interest of our indigenous languages and those who honoured the occasion returned enlightened, some publicly avowing to be communicating with their children in their local language henceforth.

0Shares
0 0
Share
Previous NO LIGHT NO PAYMENT, IKA LANDLORDS/LANDLADIES TO BEDC
Next DEIN OF AGBOR MAKES CASE FOR EFFECTIVE TEACHING