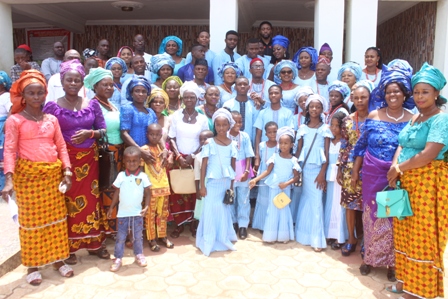 The burial ceremony which began on Thursday, April 26, 2018, with service of songs at Sacred Heart Catholic Church, Umunede, saw many sympathizers and worshipers of the church gathered together to pray for the repose of the deceased, who was described as a committed, dedicated and faithful servant of God, who during her lifetime contributed to the development of the church. Her remains were committed to mother earth at her family compound in Ileje quarters, Umunede, the following day being on Friday, April 27, 2018 after a memorial mass held in her honour.

In her biography, Ezinne Emeri was born to the family of late Uwakina and Ehibor of Idumu-Uzogbo in Idumu-Ileje quarters, Umunede, Ika North East Local Government Area. She was the fifth and last child of her parents. She was noticeable anywhere for her melodious voice and she led a group of dancers. She was a passionate and a hardworking woman who has the fear of God. However, western education was a no go area for women at her time, yet she worked so hard to ensure that her children go to school and attained positions of enviable heights in the society. She was indeed a woman of virtue. Her marriage to late Dr. Alexander Uloegbulem Emeri was blessed with six children. She died January 7, 2018 at the age of 98 years.

In a tribute, the deceased’s first child and the only daughter, Mrs. Chukwuji Caroline Agbor, described her late mother as a woman of many parts who is loving and caring. She stated that she and her siblings are going to miss her mother, praying God to grant her soul a peaceful rest.

Mama’s first son and the Agbasogun 1of Umunede Kingdom, Chief Sunday Emeri said he is fortunate and grateful to Almighty God that he was brought into the world by his late mother. He described his late mother as a caring, honest, kind, discipline and a loving woman anyone will desire to have as a mother.

Her 2nd son, Chief Andrew Oziri Emeri said he is yet to believe that his mother is no more and lamented over her death. While pointing out that he is proud to have her as his mother, he affirms that her mother lived a fulfilled life by impacting positively on the lives of her children and who came across her while alive. He wishes her a happy rest in the Lord’s bosom.

As many people who were present at the funeral eulogizes Chief Andrew Emeri for giving his late mother a befitting burial.