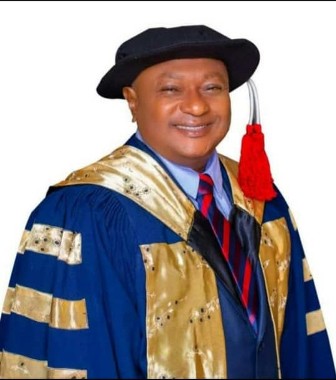 In the last three years since he emerged on the scene as the 7th substantive Vice-Chancellor of Delta State University, Abraka, Professor Andy Egwunyenga has left no one in doubt about achieving his mission – to lead, inspire and advance the University in all its ramifications. In fact, those who were initially skeptical about his competence and determination to achieve great results and leap frog the university, such misgivings have continued to evaporate as the internationally acclaimed scholar matches his words with concrete and productive actions. The university is the better for it in different areas.

In his mission and vision statement, the Vice-Chancellor had carefully articulated the critical areas of need. Acknowledging the competitive nature of university education in the country, Prof. Egwunyenga had alerted his colleagues to the need to be more internet savvy. ”The University is growing and we must grow with it as regards the ICT. The staff should also be ICT compliant. This requires hard work and continuous learning”, he had noted.

His promise to lead, inspire and advance the transformation of the university by building an effective and motivated work force, pursuit of innovation, using ICT, strengthening of academic units, improving of revenue base and deploying a new approach to administration based on robust focus on staff and students’ welfare and open communication has remained on course. He also assured his colleagues that he would put in place measures that would help the university become the best state university in the country.

Realizing the importance of staff and students, he put in administrative structures that would improve their conditions. At the time of his emergence, the university could be said to be in a state of ”administrative over heat” which caused many staff to be depressed, increasing staff presence at the university medical centre. Realizing the state of affairs, one of his early decisions was to address cases of injustice meted out to staff by setting up committees to investigate and recommend to the administration a proper course of action. Based on the outcomes of such committees, cases of injustice were expeditiously and satisfactorily addressed.

SEE ALSO: COMMUNIQUE ISSUED BY THE ASSOCIATION OF COMMUNITY NEWSPAPER PUBLISHERS OF NIGERIA

Many staff who were unjustly punished through withholding of promotions, dismissals and other punishments clearly depicting official highhandedness, were restored. The effect was instant, as laughter replaced the ”weeping, wailing and gnashing of teeth” that had become their lot. As soon as he addressed the nagging cases of injustice, Professor Egwunyenga deployed his considerable administrative and academic prowess to the ‘real’ issues of academic excellence and global visibility which he hinged on the harnessing of the opportunities of the ICT. This writer had previously noted how he had directed that ”all staff should be registered with Google Scholar to enhance the university visibility, since knowledge must be shared to be useful”. Rather than staff waiting to be threatened or cajoled, they willingly complied with the Vice-Chancellor’s directive because they had bought into his vision of a greater DELSU.

Indeed, the decision paid off handsomely in no time as the university has become more visible and credible. Its rankings improved rapidly from 78th position among Nigerian Universities to 38th position and from a previous 19th position to 7th among state universities. This writer captured the situation in a widely circulated article in these words: ”A global endorsement of the concerted efforts of the Professor Andy Egwunyenga administration at the Delta State University, Abraka, Nigeria, has come to light through the just released rankings of 30,000 universities in 200 countries by the famous Ranking Web or Webometrics”.

That was about six months into his tenure in mid-2020. He has since then continued to steer the university in the right direction as attested to by different stakeholders. Three years down the line, the Professor of Parasitology and public health consultant, has improved in virtually all aspects of life in the university. According to the Vice-Chancellor who has a friendly disposition, the administration has ”made tremendous progress with determination to do more”.

The astonishing growth of the university was on display in the last week of April when it celebrated its 30th Anniversary and 14th Convocation ceremonies with pomp and pageantry. The university rolled out the drums and red carpets to a captive and celebratory audience from different parts of the world. ”We have a lot to celebrate at 30”, he told DELSU News, the university’s official magazine. ”It is a celebration of Excellence and success. It is a celebration of the spirit of a people that are determined to get excellent results”.

Indeed, all roads led to DELSU in the last week of April. Some of the highlights of the celebrations were arts exhibition, presentation of the commemorative book DELSU at 30, carnival, commissioning of projects by the Visitor to the university, Sen. (Dr.) Ifeanyi A. Okowa; among others. The Commemorative lecture was delivered by fiery Kenyan lawyer, Professor Patrick Loch Otieno Lumumba, of the PLO Foundation, who agonized over the embarrassing level of underdevelopment of Africa. Importantly too, was the Convocation lecture by His Excellency, Ambassador Professor Ibrahim Agboola Gambari, CFR, the Chief of Staff to the President of Nigeria, who spoke on the role of education in national development.

In order to enhance its town and gown harmony, the university conferred Honorary Doctorate Degrees on HRM Hon Justice Francis Fedode Tabai, a former Pro Chancellor and Chairman of Council of DELSU and banking mogul, Chief Jim James Ovia, MFR, CON, Founder and Chairman of the highly successful Zenith Bank. For the first time, the university appointed two eminent academics as Professor Emeritus, namely Professor Eric A. Arubayi and Professor Sam Ukala (Post humously). Many have attributed his giant strides at DELSU to his excellent human relations and a multi-dimensional experience from which he has harvested. Apart from attaining the rank of Professor at just 45, he was the pioneer Director of the Institute of Science Laboratory Technology (ISLT) at DELSU, Chairman, of ASUU-DELSU, Rector of Delta State Polytechnic, Ogwashi-Uku, which he turned around, in addition to membership of national and international organizations.

Professor Nwanne is the Director, Ceremonials,