Delivering his address before the commissioning of the project, the Owa Monarch, His Royal Majesty (HRM) Dr. Emmanuel Efeizomor JP expressed joy, saying that the project site happened to be their farmland, but now occupied by a giant beautiful edifice, the Teachers Professional Development Centre (TPDC).

According to him, “It is a thing of joy because the infrastructural standard of the newly constructed TPDC waiting for official commissioning will compete favourably with others abroad that the Ika people, Delta State and Nigeria as whole will see the need to come to the centre to acquire more knowledge rather than travel abroad.

“Sincerely, when I look at the fantastic and wonderful development that has taken place here, I begin to wonder what manner of Governor we have now because in Nigeria today we are used to the phenomenon that there is no money (EGHO ARIA). But how Okowa has found money to be executing projects of all kinds marvels me.

PERSONALITY: DEIN OF AGBOR IS MY BROTHER – Owa Monarch

“On behalf of the good people of Ika nation, Delta State and Nigerians, I have to say a big thank you (Okowa).

“The TPDC is beyond a university since it provides an avenue for people to learn and develop themselves. So therefore, by the establishment of TPDC, Okowa has wiped out illiteracy, poverty and created foresight for the human lights to shine up.

“That Okowa been the talk and do governor is because he implements and not just talk about budget. The TPDC is a sound standard for the total liberation of the people”.

Continuing, Dr. Efeizomor told the governor that there is money in Delta State for his government’s ability to build lots of infrastructural development for the people. He then pleaded with Governor Ikpeazu to join the people in thanking Okowa for his good works which speaks volume.

He said that the monumental investment in developing young people was already putting Delta ahead of other states in the country.

He stated that the Delta Governor had done very well in the deployment of resources to execute various people-oriented projects, adding that the establishment of TPDC by his administration was a clear attestation of his love for a robust education sector in the state.

According to Ikpeazu, Okowa means well for Deltans with the various legacy projects, including the Teachers Professional Development Centre, a unique and symbolic institution that will significantly boost educational development in the state. 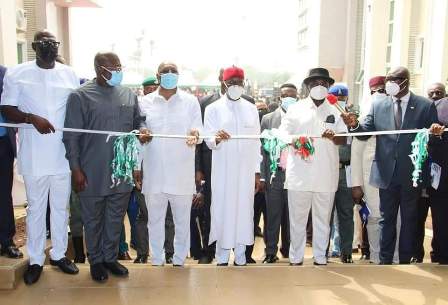 He said that the best way to bring back the lost glory in education was for stakeholders to upgrade the technical know-how of teachers, update school’s curriculum and create an atmosphere conducive for learning.

“What Governor Okowa did by the establishment of the Teachers Professional Development Centre is beyond pedestrian governance.

“I am so thrilled that I am tempted to doff my cap for Okowa. He is a man who tackles issues with principle,” Ikpeazu added.

He, therefore, urged those who would manage the centre to do so in accordance with the vision establishing it, and urged other states in the country with weak educational personnel to come to the centre to strengthen the capacity of their teachers.

In his remark, Governor Okowa said that the centre was established to promote sustained professional development of teachers in the state and the country.

He said that the mission of the institute was aimed at sharpening the skills of teachers across board, and pledged his administration’s readiness to embark on projects with direct bearing on the lives of the people.

The governor called on teachers and their employers to tap into the experience of experts at the centre to be professionally qualified to teach knowledge seekers.

Earlier, the Commissioner for Basic and Secondary Education, Mr. Patrick Ukah, had given a brief history of the centre, which has state-of-the-art facilities, and said that it was established to teach teachers theoretically and practically.

In speeches, Chairman of Ika North East Local Government Area, Mr. Victor Ebonka and the Obi of Owa Kingdom, Dr. Emmanuel Efeizomor II, thanked Governor Okowa for even development of all parts of the state and promised to protect the facilities from vandals.

They said that the centre would contribute immensely in eliminating illiteracy in the state and beyond.

Share
Previous REFLECTION: STAYING STRONG IN TIME OF CRISIS
Next WE ARE DISAPPOINTED IN YOU – Obi of Abavo tells Okonta