There was tragedy on Tuesday 31st October, 2017 as an 18 seater commuter bus failed brake along old Lagos Asaba road, leaving many passerby injured and properties damaged. 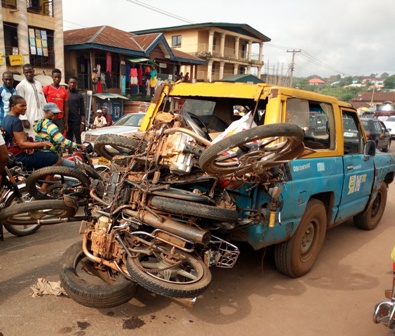 The tragic incident occurred when a bus failed brake from the Fidelity Bank section along the Old Lagos/Asaba road and while trying to steer the vehicle under control, the driver rammed into pedestrians from the Iregwa Street section also along Old Lagos/Asaba road, leaving them severely injured. After the incident, nine persons were rushed to the Central Hospital Agbor for medical attention.

On a visit to the Central Hospital to confirm the number of victims injured in the accident, doctors and nurses were seen working to save lives.
However, in a phone call to Ika Weekly on Thursday 2nd Nov 2017, the Zonal Medical Director, Central Hospital, Agbor, Dr. Francis Nwabua confirmed that out of the 9 cases (7 male and 2 female) that were brought to the hospital, two of them gave up, some are still receiving treatment, while some with minor injuries have since been discharged.
In an interview, Sgt. Francis Ejeme told reporters that the accident was due to mechanical fault which was beyond the control of the driver. He advised driving with caution.
Also speaking, Rev. Holins Alizor who was at the scene around the First Bank area said his car was damaged and somebody was hit by the bus beside his car. He said he had already seen the accident in the dream, hence seeing it manifesting was not strange. He added that the accident would have been worse if not that he prayed fervently concerning the revelation. Speaking on how accidents can be averted in future, he said that Christians must come together in fellowship since issues like this were not ordinary.
Some other persons, who were at the scene, advised pedestals to always, make use of the walk ways instead of the main road so as to reduce the rate of accidents. They urged the local council authorities to clear the walkways of trading. They also pleaded with the Local Councils to create speed breaks along the roads to help reduce accidents.