TRIPLE CELEBRATION FOR BABA-FIRE AND FAMILY

It was a triple celebration on Sunday, November 4, 2018 at the auditorium of the headquarters of Wind of Change Deliverance Ministry, situated at Azihen by Ebeye Street, Agbor, Ika South Local Government Area, as the founder of the church, Apostle Chuks Elisha Okenye, also known as Baba Fire, his wife and daughter celebrated their birthdays. 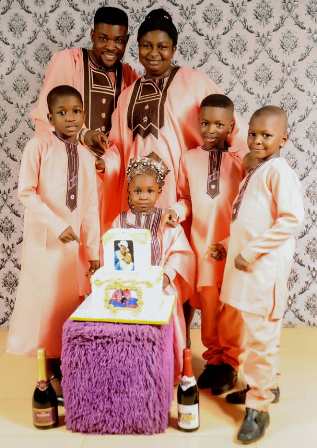 The colourful celebration which was well attended by the church members, friends and well-wishers, had many in their speeches pouring encomiums on the church founder, Baba Fire, describing him as a true anointed man of God through whom God has blessed them. Baba Fire’s wife who also is addressed as Mama Fire was described as a great instrument to her husband and the church, whose care and generosity has no comparison. They wished the celebrants happy birthdays, praying that celebrations will not cease in their home.

In his remark, Apostle Okenye affirmed that this year’s celebration has been a remarkable one for him and his family compared to the previous celebrations, noting that it is a sign of growth for them. “When you enter a new level, you see a new level,” he said.

He thanked God Almighty for all He has done for him, his family and the church, praying God to give all who shared in his joy a blessing that will make them say that the Lord has done it again.

The clergyman concluded by admonishing all that were present the need to continue to put their faith in God from where their help comes from, urging them not to pray God for prosperity only, but rather they should pray for maturity and the capacity to hold to the blessings of God upon them firmly. He pointed out that a rejected stone may end up being the chief corner stone, even as he prays that the blessings of God will not depart from the church members.