The traditional ruler of Umunede kingdom, HRM Dr. Ezeagwu Ezenwali I (JP) has finally spoken over the recent fall of the more than a century old tree in his palace, saying that the tree had been there since the existence of Umunede.

He stated this during the week while speaking to Ika Weekly reporter in his palace, noting that his ancestors who ruled before him met the tree. The monarch said he is thankful to God that no casualty was recorded, saying that this has proven that there is peace in his community. Dr. Ezeagwu urged his subjects to always tread on the path of righteousness, adding that the falling of the tree with no life lost has shown that his (monarch) hands are clean. 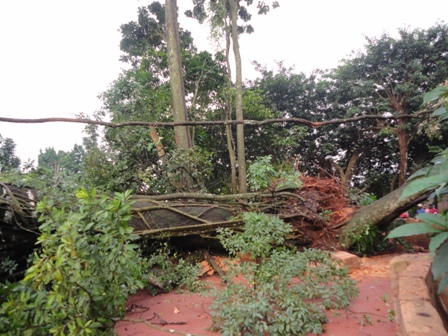 He disclosed that the falling of the tree is not strange, stressing that the roots of the tree were all worn out. According to the royal father, “Even the statue of the town crier at the front of the palace was not damaged. This has shown that there is peace in my household and my entire kingdom. He prayed God to elevate all his subjects and make Umunede the envy of other communities”.

HRM Dr. Ezeagwu Ezenwali I (JP), in another development sympathized with the Igbodo traditional ruler, HRM Obi Ikechukwu Nkeobikwu Osadume I, over the recent flooding in his community, urging him to stay strong as God will see him through.

The Umunede monarch also used the opportunity to congratulate Mr. Charles Aniagwu on his recent appointment and subsequent swearing-in as Commissioner for Information, praying God to give him the strength to pilot the affairs of his new office.

It was by God’s protection that no life was lost when an ancient tree in Umunede Kingdom in Ika North East LGA of Delta State, said to be as old as the community itself.

According to sources, the tree said to be about a century old,  fell in the wee hours of Sunday, July 21, 2019 which traditionally, was seen as strange by many.

Speaking to Ika Weekly reporter during a visit to the palace, a prominent member of the royal family, Chief Amos Onyeagwu said they are thankful to God that no life was lost. According to him, “The tree is a symbol of unity and peace in Umunede Kingdom. It is centuries old. It is as old as the time the founder of Umunede founded this prominent community.

0Shares
0 0
Share
Previous SCREENING:REFLECTING ON THE ‘BOW AND GO’ SENATE
Next WE ARE YET TO FEEL YOUR IMPACT-Owa-Alizomor Community tells Okowa