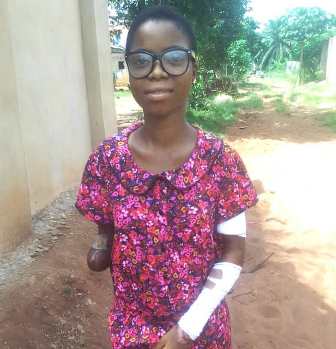 Miss Favour Richard, the victim of high tension electrocution on August 11, 2021, along Owa-Ekei Road in Boji-Boji, Owa, off Efeizomor Street beside the residence of Senator Dr.Ifeanyi Okowa, the governor of Delta State, returned alive but lost her right hand, and appeals for financial support of N3million to settle hospital bill, buy artificial hand

Speaking with newsmen, Miss Richard gave thanks to God for His love that gave her victory in death. According to her, “I want to use this opportunity to thank the good people of Ika land for their prayers. Many thought that I will die because of the degree of the injury that sustained. But I made it, I am alive and it is the Lord’s doing.

“Indeed, I went to the land of the dead and came back alive even though I passed through pains with several operations. My right hand was cut off as it was the best option for me according to the Doctors.

“My special thanks also go to the team of Doctors at El-comfort Hospital, Asaba through which God granted me quick healing.

“Sincerely, it has not been easy and I thank God for giving me another chance to live again”.

Continuing, Miss Richard appreciated her mother for her sacrifices and she even went to the extent of borrowing to ensure that she got well. She passionately appealed to well-meaning Ika people, Deltans, Nigerians, and governments at all levels to come to her financial assistance, disclosing that she needs over three million for the completion of medical treatment and for the purchase of artificial hand.

She stated that no amount of money will be regarded as small, praying that the good Lord which saw her through the dark valley of death to survive the electrocution will bless everyone who supports her. According to her, she can be reached through her phone numbers 08142692853 or 09129709611. She further appealed that the financial support should be through the account number- 2253455057, account name- Matthew Gonyo, Zenith bank Plc.