WE ARE GRATEFUL TO THE STATE GOVERNMENT – Principal

The Principal of Igumbor Otiku Secondary School, Agbor, Mr. Anthony A. Osiagwu, has on behalf of the management, staff and students of the school, expressed their gratitude to the state government, for the ongoing several building projects in the school. 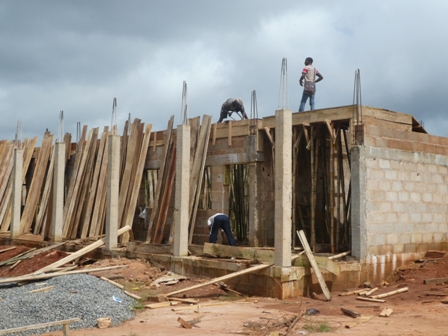 The principal gave the compliment recently during an interactive session with newsmen who visited him at his school to check the level of work on the projects being undertaken by the state government school.

In his word, “on behalf of the school authority and the entire students, we are indeed grateful to the state government under the leadership of our amiable Governor, His Excellency Senator Dr. Ifeanyi Okowa, for the several ongoing building projects in the school.”

He disclosed that apart from the initial 24 classroom blocks, the State Government has added the construction of an administrative block for the school, noting that work in all the projects are progressing speedily.

Continuing, Mr. Osiagwu, revealed that the school has about thirty student teachers posted to them, from Delta State University, Abraka, to handle different subjects; disclosing that teaching and learning have really commenced and they have been assigned classes in their various subject areas.

Speaking further, he stated that the level of resumption compliance for the new 2018/2019 academic session is on the high side, with the students population soaring very high because of the new student teachers sent to the school. He stated that the Education Ministry gave them 342 students for JSS 1 saying that the school authority has started registering the students.

He however revealed that the school currently has accommodation problem because of the yet to be completed construction work on the classroom blocks.

He was quick to add that based on the development, he made an alternative arrangement with the Head Teacher of Ihioma Primary School, Agbor, which is a neighbouring school, where they gave him two block classroom; explaining that he has some renovation work to carry out in the improvised classroom though as the building is not in good shape.

When asked by newsmen if the authorities of the Education Ministry are aware of the arrangement, he responded that the Ministry was aware, explaining that the Chief Inspector of Education Ika South Local Government Area Mrs. J.O. Nwanji, officially visited the school after he complained to her; and after inspecting the whole compound, she went to the Primary School and after her discussion with the Head Teacher, Lady A. Ofuasia who consented to the arrangement, gave out the two classrooms Igumbor Otiku for the time been..

Mr. Osiagwu, expressed his appreciation to Lady Ofuasia and to Mrs. J.O. Nwanji the CIE, for their quick intervention.

Continuing, the Principal commended the efforts of his teachers, with reference to the performance of his students at the first Junior School Certificate Examination conducted at the school, where the eighty four registered students that sat for the Junior WAEC passed successfully without any resit; saying that is to show the level of hardwork that the teachers are exhibiting and the students on their part are equally serious with their studies; emphasizing that in the school, nothing is taken for granted.