WE ARE SOLIDLY BEHIND OKOWA’S CANDIDACY – Ucheka Support Group 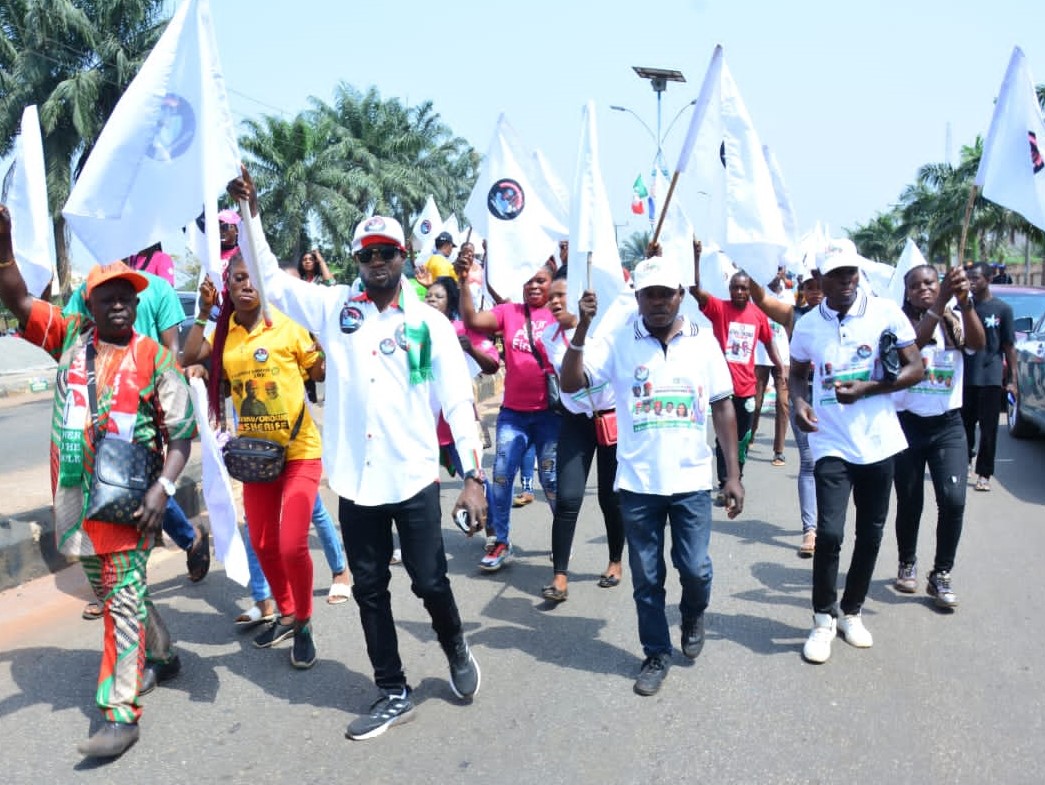 WE ARE SOLIDLY BEHIND OKOWA’S CANDIDACY – Ucheka Support Group

As the leadership of the People’s Democratic Party (PDP), Delta State, stormed Ika North-East Local Government Area on Friday, January 13, 2023 for her Campaign Rally, the Founder and members of the Ucheka Support Group for PDP, have unanimously said that they are solidly behind the candidacy of His Excellency, Sen. Dr. Ifeanyi A. Okowa, as he is set to contest for the position of the Vice President of Nigeria, come May 29, 2023.

Speaking with Ika Weekly Newspaper Reporter shortly after the Campaign Rally which took place at Ika Grammar School, Boji-Boji, Owa, Delta State, the Founder, Ucheka Support Group for PDP, Comr. Victor Ucheka, thanked Governor Ifeanyi Okowa for his transformation agenda fulfilment across the State. He described the Okowa’s Government as the best administration Deltans have ever had since the inception of democracy.

Speaking further, Comr. Victor Ucheka who doubles as the Founder, Okowa Must Win political group, encouraged all well-meaning Nigerians to embrace PDP, stressing that Nigeria as a developing country, desires an experienced political leader like Alhaji Atiku Abubakar, PDP Presidential Candidates and Sen. Dr. Ifeanyi A. Okowa, PDP Vice Presidential Flag-bearer, to help restructure Nigeria and rescue the people from the hands of the bad Leaders of the All Progressives Congress (APC). The illustrious son of Idumuzugbo Quarters, Owa-Oyibu in Ika North-East Local Government Area of Delta State, Comr. Victor Ucheka, disclosed that Nigeria will be far better than it is, if Sen. Ifeanyi Okowa becomes the next Vice President, saying because when it comes to leadership experience, grassroot politics and good characters, Sen. Ifeanyi Okowa has all it takes to move Nigeria to greater height.

He charged all his group’s members to remain faithful and committed to PDP and ensure that they continue to mobilize their loved ones who are not PDP supporters to join PDP to enable them work together to deliver Sen. Ifeanyi Okowa as the next Vice President of Nigeria, come February 25th, 2023.

Also speaking, Dr. Isioma Ucheka, Aka, Small Body, and Comr. Nduka Unah, PRO to the Ucheka Support Group, advised all eligible voters in Ika North-East in particular and Nigeria in general who are yet to acquire their Permanent Voters Cards (PVCS) to endeavor to do so in order to vote wisely for all PDP Candidates in the forthcoming General Elections.

They appreciated all members, Coordinators and Executive of the Ucheka Support Group for their support in ensuring that PDP in Ika North-East is moving forward. They concluded by praying God to grant Sen. Ifeanyi Okowa and other PDP Candidates victory in their various elections.